Pune, India -- Imagine a cluster of caves in a horseshoe-shaped gorge with a small river flowing through it. Add to that a jaw-dropping 7-stepped waterfall through which the river enters the gorge. 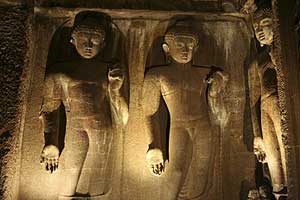 And now, imagine this place in the monsoons with all the greenery that comes along with it, and the cascading waterfalls. Heaven, isn’t it? Well, that’s the place Buddhist monks had decided to build caves and appease the heavens, which lie somewhere above the stratosphere and the ionosphere.

With the ASI guide to Ajanta in one hand, and the cam in the other, and the backpack where it belongs - my back - I walked in. The plan: explore each cave at leisure, while reading through what the guide had to say about that particular cave, and click pics, loads of them.Enter Cave 1, among the best that Ajanta has to offer. “Foul play!” I screamed to myself.

Forget reading - so dim was the light inside that I had to set my cam’s shutter speed to 4 seconds, at ISO l600. So I was holding the cam steadily, without the minutest shake, for 4 full seconds (the use of flash and tripod is banned inside the caves to prevent damage to the paintings). But the aura of Padmapani and Vajrapani proved too much to be ignored and I clicked quite a few pics, hoping I would get at least a single good one. And I wasn’t disappointed.

Unlike Ellora, which had only sculptures in all the caves, a few ones here had paintings as well. So the visitor wouldn’t get bored. But the sheer number of caves I’ve been walking into took a toll on my enthusiasm levels - I already begun feeling like a caveman with my nostrils getting used to the pungent odour of bat-droppings mixed with that of dampness. But what’s that odour compared to the visual delight the caves rendered for me to see!

What’s the point in banging our chests about our culture and heritage and nominating every other structure in the country for a World Heritage Site status, when we’re unable to maintain the already recognized ones properly? A fresco in one of the caves at Ajanta was so badly damaged by the Raja loves Rani brigade that the ASI was forced to enclose the entire fresco in a glass case and put up a board urging the visitors not to damage our national heritage. The painting, mind you, was dated back to the 2nd Century BC. A painting survived the vagaries of nature and the tests of time for thousands of years, only to be damaged by the mindless morons within a couple of centuries (Ajanta was discovered in the early 19th Century). So much for our bragging on our so called culture and heritage. Kudos to ASI for the good maintenance of Ajanta and Ellora, though I would love to see more dustbins and less usage of cement in reconstruction works. It looks awful!

This particular statue of reclining Buddha is the most famous attraction at Ajanta, after Padmapani and Vajrapani. The statue shows Buddha in his final moments. There are mortals below him ruing his imminent departure and above him are the angels welcoming him to heaven.

It didn’t take me more than 5 hours to visit all the caves (though there are art lovers who would spend days admiring the wonderful depiction of Jataka tales) and I decided to explore the viewpoint on the hill facing them. The view was wonderful, and what was even better was the walk away from it, towards the waterfalls. While I strolled along them, I was taken to a hamlet where every person speaks at least five languages - and at least two of them being foreign! They learnt the languages while talking to the visitors and most of them earn their living by working as guides or selling the crystalline quartz that is found in abundance here.

But what made my day was the wonderful sight of the waterfalls. Seven steps with their surface softened by centuries of water flowing past them is a sight to behold. And I held the sight firmly, both in my heart and through my camera. I really wish I had a telephoto lens at that time.

That night saw me struggling to get into a bus to Pune, only managing to get into a mangled red one at 3:00 AM. But what a trip it was … three days of absolute bliss, a life that only Jason Bourne might have lived - away from work, friends, and everything that’s related to my past life, except a phone call everyday to my parents to let them know of my existence. The bus rocked and rolled, and when I woke up, the air smelled of petrol, dust and filth.

Pune had just welcomed me.