In Bihar one can still hear legends from the past alternate with the realities of the present.

Bihar, India -- This time our travel plans centred around Patna, for the usual reason; there was “somebody” there who would extend a congenial hospitality to us, a bungalow, cook and a car thrown in. 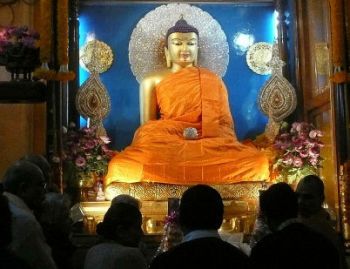 Whenever Bihar is mentioned, people who come from more prosperous, better-governed States react in one of two ways: either they snigger and roll their eyes in mock horror or they erupt in anger that we should have such a State in our union, marring our image, especially now, in these “global” times.

I had done both in the past, adding sometimes a sadness that the land of Chandragupta Maurya and Ashoka should have fallen on such evil times. Of Patna, I knew nothing except newspaper reports of lawlessness, leading to horrors of various kinds.

But I also knew that the Ganga flowed through Patna.

And what a Ganga - sweeping across a vast area, as far as the eye can see; what we take to be the horizon is still the haze on the water. What can our response be in the face of this magnificence, the river that flows not on this earth alone but in our very bones? It can only be stillness, pulling every wrangle in the spirit towards a centre of stillness that we may become one with this water.

There are other rivers that accompany us or that we cross on our trips — from Gaya, where a resident claims that Gaya and not Kashi is the oldest living city in the world, where the poetically named Phalgu flows, enabling Hindus who keep the faith to conduct funeral rites for their ancestors and other loved ones, including beloved animals, that their spirits may attain salvation. An eeriness envelops the place; it is a place of death though eternal salvation is the aim of those who visit it.

We cross the lovely river Son, in contrast a river of life, to Sonepur, which hosts the famous Sonepur mela where one can buy everything from an ordinary pin to a majestic elephant! The Son, too, is of a vast expanse, reminding one of Vaigai or the Tamirabarani, not flowing from bank to bank but of boating depths where the water flows.

The Son borders the site of the Gajendra Moksham, the very place where Lord Vishnu ran helter-skelter, even carrying his vehicle, the loyal Garuda, in his haste to protect the elephant Gajendra with his leg in the mouth of the treacherous crocodile. Two temples are located here, one ancient, another, a new one built in the Dravidian style. But of this a little later, for, we now walk where the Buddha walked …

The Buddha circuit: Rajgir, Bodhgaya, Nalanda, Sarnath, Vaishali — the Buddha trail traces the life of the Buddha, his meditations on the hill of Ratnagiri (Rajgir) after he leaves his home in Kapilavastu, Bodhgaya where he attains enlightenment, and Sarnath where he gives his first sermon. At Vaishali, the Buddha inducts the court dancer Amrapali into the Buddhist monastic life. For the first time, women are allowed to become bhikkunis (monks).

Nalanda, of course, stands splendid testimony to the grand intellectual life of the times. From its inception in the fifth century B.C., Nalanda remained the greatest university of ancient times until the 12th century CE, accommodating 2,000 teachers and 10,000 students during most of its existence. Admission was through debate with the dwar pandit, the scholar-doorkeeper who decided whether the student could be allowed to pass through the hallowed portals of the great university. Astronomy, mathematics, philosophy, religion, medicine, all subjects religious and secular, Buddhist and Hindu, were taught there. It boasted a library three stories high.

When you travel, not everything strikes your imagination, not everything speaks to you with the same intensity or with any meaning. Thus, a Siddhartha whose sacrifice had captured my imagination in my younger days and the sakhyamuni whom I had revered wholeheartedly now left me unmoved.

The entire Buddha circuit has been taken over by the Buddhist nations — stupas and temples and monasteries have been built in Rajgir, Bodhgaya and Sarnath by the Japanese, the Chinese, the Koreans, the Thais, the Tibetans and Sri Lankans. International flights arrive in Bodhgaya; strangely, there are no domestic flights.

The colour of these places is now overwhelmingly orange. Buddhists from these lands arrive in complete piety and devotion. And it is through their faith that I now try to capture my own. The Mahabodhi temple at Bodhgaya is lit up, for, the karmapa is in town. The original black Buddha in the sanctum is now gilded over and the austere muni now has a glowing gem as his third eye and holds a sparkling gem-studded bhikshapatram in his hand, which looks more like a jewel box, sadly.

The bodhi tree, fifth from the original under which Siddhartha became the Buddha, the enlightened one, stands in the courtyard and underneath it the vajrasana on which the ascetic sat in meditation. The path which he strode still stands with stone lotuses marking real ones which were supposed to have sprung up with every step that he took.

We travel many roads from Patna, and surprisingly, the roads are good, testing our patience only in short stretches. We pass miles and miles of cultivated land — tur dal, nodding yellow mustard, mango groves, and rice, rice, rice. Tilled land, harvested land, and sacks and sacks of grain, stacked near the fields or moving in trucks. The road to Vaishali is filled with banana plantations, the region is famous for its bananas.

So much food but where are the villages? Village names are marked, in modern signage too, but no roads, not even dirt roads lead inside. There are fields, and there are hovels, not a single pucca building do we see.

The land is brimming with the harvest, with all sorts of sweet smelling rice, scented and golden. But the people are resigned, sullen, their spirit sapped by repeated rapes upon their hopes and dreams.

But wait, in a corner of Bihar, in the Vaishali region, in Sonepur, there is a small temple dedicated to Hariharnath. It is an unpretentious temple, almost a chapel, flat-roofed, plain-walled. But in the young priest, calm of mind, concentrated in worship, expecting nothing, we see an India which is being lost in the grab-grab-grab of a changing world. A BHU alumnus, he conducts the worship with each one of us, unhurried, enveloping us in the well-being of ritual. Devoid of all ornamentation and trappings of cloth and gold, the primeval lingam with the incision separating Hari and Haran and the unadorned, four-armed Vishnu, contribute by their unclothed purity to the serenity that enfolds us in that simple worship.

But what of Benaras, you ask? The teeming ghats from a boat on the river, the evening aarti that is more of a son et lumiere and that lacks the spiritual fervour of the aarti at Hardwar, the Kashi Vishwanath, and the resplendent Annapoorani? The gullies and the enticing street food, the silks and the cottons? It was but a passing show, for, you need to live there before you can speak of Kashi, the oldest living city in the world.