BEIJING, China -- Listed as a World Heritage site in 1996, Leshan Giant Buddha and Mount Emei in Southwest China's Sichuan Province draw tourists and Buddhist pilgrims from all over the world. 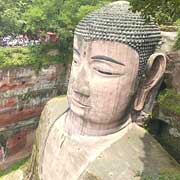 According to historical records, the first Buddhist temple in China was built in the beautiful surroundings of Mount Emei in the first century, shortly after Buddhism was introduced from India.

The addition of other temples in later centuries turned the 3,099-meter-tall summit into one of China's four most sacred Buddhist mountains. The others are Mount Wutai in Shanxi Province, Mount Jiuhua in Jiangxi Province, and Mount Putuo in Zhejiang Province.

Over the centuries, the cultural treasures in the fertile Sichuan Basin region have grown in number. Among them, the most remarkable is Leshan Giant Buddha.

The Giant Buddha lies to the east of the city of Leshan in Sichuan Province at the confluence of the Minjiang, Dadu and Qingyi rivers. The statue faces the sacred Mount Emei with the rivers flowing below its feet.

The statue depicts a seated Maitreya Buddha. Maitreya is the Buddha of the future, who will appear to preach dharma when the teachings of Gautama Buddha have faded away from public consciousness.

Worshiping Maitreya was especially popular between the 4th and 7th centuries, and Maitreya's images are found throughout Buddhist temples in China, conveying his characteristic air of expectancy and promise. The Leshan statue is the most spectacular of them all.

The huge project is said to be the idea of a Chinese monk named Haitong, who hoped the Buddha would calm the turbulent waters that plagued passing boats.

Carved from a side of Lingyun Hill, the head of the gigantic sculpture is level with the top of the cliff.

When the statue was carved, a huge 13-story wooden structure was built to shelter it from rain and sunshine. The structure was later destroyed in wars at the end of the Yuan Dynasty (1279-1368). The Buddha sits impassively against the mountain with its hands on its knees, looking across the rivers with heavy-lidded eyes. It is 71 meters tall. Its head is 14.7 meters long and 10 meters wide with a total of 1,021 buns of coiled hair.

Its shoulders are 28 meters wide and its smallest toenail can accommodate a seated person. Another architectural highlight is the drainage system. This system is made up of hidden gutters and channels, scattered on the head and arms, behind the ears and in the clothes.

The system, which helps carry away rainwater and keep the inner parts dry, plays an important part in the protection of the Buddha.

Seventeen meters taller than the Buddha statue of Bamiyan in Afghanistan, which was destroyed by the deposed Taliban regime in 2001, Leshan Giant Buddha is the largest Buddha statue in the world today.

Other attractions in the area include Lingyun Monastery, the Great Buddha Temple, the Dongpo Tower, and the Cave of Master Haitong.

Nowadays most visitors opt for half-day tours around Leshan Giant Buddha before or after they visit Mount Emei. Entry tickets cost 80 yuan per head.

Mount Emei is located 180 kilometers south of Chengdu, capital city of Sichuan Province, and only 28 kilometers from the city of Leshan.

The name "Emei" literally means "delicate eyebrow." The mountain derives its name from two peaks, the Wanfo (Ten Thousand Buddha) Summit and Golden Summit, which face each other and resemble the delicate eyebrows of a Chinese beauty.

Mount Emei is also called the "mountain of brightness" in Buddhism, and is associated with Puxian Bodhisattva (Samantabhadra).

Ever since Buddhism arrived in China, Mount Emei has been an important center of refuge and retreat for pilgrims. There used to be more than 100 temples and shrines on the mountain, but only about 30 still stand today.

The Baoguo Temple, situated at the foot of the mountain, is the largest temple on Mount Emei. It was built during the Ming Dynasty (1368-1644).

The red copper Huayan Pagoda inside the temple is an important relic for those studying Chinese Buddhism. The 14-story pagoda is seven meters high and its walls are engraved with more than 4,700 images of the Buddha and the full text of the Buddhist Sutra of the Huayan Sect.

From the temple to the top of mountain is an uphill walk of five kilometers, much of it on stone steps.

On the way to the temple, tourists frequently encounter a band of monkeys. They aren't dangerous, but will beg for food and grab at bags. Visitors should carry walking sticks to shoo them away.

There are minibuses that can take tourists halfway up the mountain (20 yuan) or to near the top (40 yuan). From the latter bus stop, tourists can also take a cable car the rest of the way to Gold Summit.

On the summit, there are two temples, the Woyun Nunnery and Huazang Temple, as well as thousands of padlocks inscribed with couples'names to symbolize eternal love.

The Huazang Temple on the summit was founded in the 1st century CE as the Puguang Hall. It was later called the Guangxiang Temple and receiving its present royal name in 1614.

The summit is the best place to experience the four wonders of Mount Emei: the Buddha’s halo, the sea of clouds, the divine lights and the sunrise.

From the summit, tourists can take a monorail along the ridge to the Wanfo Summit, the true peak of the mountain.

Today most travelers opt for tours from Chengdu, which is located about three hours from the mountain. Once they arrive at the mountain, they take a two-hour ride to the Golden Summit, and then spend about an hour on the peak.

Entrance tickets to the mountain cost 120 yuan per head.