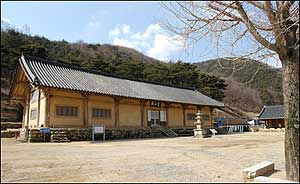 Moreover, each of them is so liberal and unique in their own body posture that no two of them seem the same ? laughing loudly, contemplating with a chin resting on a hand, riding on a tiger, lost in curiosity with a head sticking out, or being in all eagerness with palms together.

And yet, there is something that goes beyond modern man's superficial impression of them. On the one hand, their facial expressions, though not handsome and stylish at all, are so natural and unpretentious that one may never fail to feel friendly and comfortable upon seeing them; but on the other, behind their liberal posture, they appear unearthly and transcendental ? not to be reached with ease. It seems to me that they are radiating something inscrutable, while overwhelming viewers with their respect. Isn't this the very mysterious power that has seen them survive the disasters that frequently tortured the Korean Peninsula?

Also, it seems that all of them are unmistakably all eyes and ears to something serious, although they seem devoid of any worldly craving. For whom are they so attentive and, more than else, who on earth are they?

They are statues of 526 arhat, Buddhist monks who attained nirvana ? the Buddha's 10 disciples, 16 sacred ones and 500 arhats. Each statue, made of granite, weighs 50 to 80 kilograms and is 50 centimeters tall. They are enshrined at the Yeongsanjeon, or Arhat Hall, at the Geojo Hermitage, a branch of Eunhae Temple on Mount Palgong in southeastern part of Korea.

The 526 graceful arhat statues are arranged side by side in a row around the spacious hall, at the center of which lies a comparatively small altar on which a Buddha Triad is enshrined. The arhat or arahan, according to Theravada Buddhism, is an ideal human being who has reached the final enlightenment, or nirvana. Freed from all delusions, they are not to be reborn again in this troubled world. They are also believed to be concerned about worldly affairs, responding to the prayers of the faithful.

There are several different groups of 500 arhats in Buddhist history, such as the 500 enlightened disciples in the Buddha's lifetime and the 500 arhats participating in the First Buddhist Council on Buddhist scripture compilation right after the Buddha passed away.

Which group of arhats they represent is not clear, but judging from their attentive expressions, it may be that they are listening to something, such as Buddha's preaching or sincere prayers. It is obvious that belief in the 500 arhats have long been rooted among Korean Buddhists, as well as those in China and Japan.

The 526 arhats are said to have been created during the mid-Goryeo Kingdom (A.D. 918-1392) ? legend also has it that they were created overnight through the blessing of the Buddha by Ven. Cheonghwa during the ancient Silla Kingdom (57 B.C.-A.D. 935). Details of their making are unknown.

Yeongsajeon, or Arhat Hall, is, in some sense, more valued than the statues it houses. The wooden hall was built by Jin Chun Geun, a master carpenter sent from the Ming Dynasty, in today's China, at the end of Goryeo period. Wooden structures of that period are so rare today that there are only four remaining; Amitabha Hall at Buseok Temple, Amitabha Hall at Bongjeong Temple, the Main Hall at Sudeok Temple, and the Arhat Hall.

Measuring 30 meters long, 20 meters wide and 10 meters high, the rectangular-shaped Yeongsanjeon is unusually large for a single hall compared to its counterparts of that period. The reason why it was built this way is unclear, but it reveals the unique features of Goryeo architecture from seven centuries ago and that fact alone was sufficient for the hall to be designated as National Treasure No.14.

Traditional Korean structures, in general, put an emphasis on the exterior more than the interior. Hence, the inside of a building is usually small and plainly arranged with a single room, in comparison to a quite spacious courtyard in harmony with other buildings. Geojo Hermitage, however, is a rare exception to the general practice: The hermitage simply features a large hall, whose inner space appears to be more important than its outside space.

Taking a closer look at it, one can easily see the structure's natural beauty. There are no decorations or wall paintings, and every component is unadorned. Upper frames like girders, beams and rafters, which are tightly and securely interconnected with massive pillars, also expose themselves. The roof seen from the hall floor is a beautiful harmony of elaborately intertwined components, which made me feel a solemn grace. Above all, one cannot help feeling a certain dynamic power that apparently arises from the structural security and exposure of the supporting material.

In the hall of Yeongsanjeon, I was impressed with the exquisite architects of Goryeo, who must have possessed unparalleled architectural aesthetics along with their devout faith in Buddhism. Unadorned, unaffected exposure of their structure, on the other hand, may reveal their strong confidence in it.

In terms of space in a structure, the architecture of Joseon Kingdom (A.D. 1392-1910), the successor to Goryeo, seems quite different from that of its predecessor, in that the former hid crude roof frames with embellished ceilings and decorated the interior with elaborate colors, while the latter usually didn't.

Geojo Hermitage stands out in the history of Korean Buddhism as well as in its architecture. It was the birthplace of a significant Buddhist reform movement that took place at the end of Goryeo. At that time, the declining dynasty was under the thumb of military power and the monk community was at a crisis due to corrupt members and a controversy over Buddhist doctrines. Settling down the doctrinal dispute in the Buddhist circle, Seon Master Bojo Jinul, national teacher of Goryeo, organized Jeonghye-gyelsa, an ascetic community for meditation and wisdom. With this momentum, Korean Buddhism, especially its unique Seon Buddhism, came to take deep root.