TAWANG, ARUNACHAL PRADESH (India) -- This is the route that the Chinese soldiers took in 1962 to enter Indian territory. Today known as "the hidden paradise" or "the land of dawn-lit mountains", Tawang is the place if one is looking for a heavenly tryst with nature and a heady mix of history, religion, legends - and Madhuri Dixit. 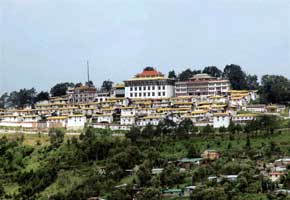 << A view of the 350-year old Buddhist Monastery at Tawang, Arunachal Pradesh

Located high in the mountain ranges of Himalayas, at 3,500 metres above sea level, Tawang is a treat for nature lovers and presents images of virgin mountain forests, exquisite gompas, quaint villages and tranquil lakes.

The major attraction of the place is the Tawang monastery, one of the largest Buddhist monasteries in India; an all-women monastery and Madhuri waterfalls, named after the Bollywood actress who came here on a film shoot.

The 400-year-old hilltop Tawang monastery is built like a fortress and is home to around 600 lamas. It has dormitories, a meeting hall, school, community kitchen, monuments and the main building housing the temple - Dukkang. With its narrow cobbled streets, numerous buildings and the enormous area it occupies, the gompa is like a mini city.

The fifth Dalai Lama, Mera Lama, set out in 1681 searching for a place to construct a monastery. One day after praying for guidance, he found his horse standing quietly on a hilltop and took it as a divine sign. Hence the name Tawang, which means chosen by the horse.

"Locals helped build the monastery and even today they are responsible for looking after it," said a monk, as others chanted softly in the quiet mountain air.

Inside the monastery, the huge 30-foot Buddha statue made of wood sits serenely amidst priceless tankhas (scroll-paintings) and Buddhist artefacts. Attached to the gompa is a museum which displays ancient manuscripts and precious artefacts, evocative of the centuries-old India-Tibet Buddhist trail.

The monastery has recently undergone renovation and bright paintings adorn its walls. Dances and ceremonial celebrations are held in the courtyard, the most important of which is held on the night of Buddha Purnima, the full moon night on which the Buddha was born, attained enlightenment and died.

A few kilometres away is the Thukje Chueling Nunnery run by female monks, home to around 50 of them. Only women are allowed to stay inside the monastery.

To reach Tawang, you drive for 12 hours from Assam's Tezpur town, a major Indian Air Force base. The road is a visual delight with clouds sometimes literally descending to the ground and ravines breaking the monotony of virgin forests straddling the commanding mountains.

Complementing the scenic journey is the destination. The Jang waterfalls, locally known as Madhuri falls, are worth a watch. Bollywood actress Madhuri Dixit shot for her film "Koyla" here.

The Indian Army war memorial at Jaswant Garh is another must visit. Dedicated to the martyrs of the 1962 India-China war, the memorial is nestled among mountains overlooking the Tawang-Chu valley.

Though China still claims Tawang is within its territory, the area is peaceful and is not affected by insurgency.

Despite increasing flow of tourists to Arunachal Pradesh, Tawang remains largely unexplored and poor roads can make the journey a really long one. Tourists also need to plan in advance, as inner line permits are needed to visit some areas in and around Tawang.