Mt Wutai, China -- It’s a rare honour to visit central China, a living storehouse of Sung Dynasty Buddhist architecture, and so upon hearing that we would be visiting China’s “Holy of Holies”, the sacred Mt Wutai (or Wutaishan), I felt humbled at being so privileged. 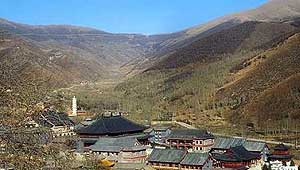 << A bird’s eye view over Wutaishan.

For hundreds of years, pilgrims and travellers alike have been spellbound by the serenity of this

place and its unique setting, and earlier this year, Mt Wutai was honoured by Unesco by being inscribed on its World Heritage List.

Mt Wutai, said to be home to the Bodhisattva Manjushri, is considered the greatest of China’s “Four Sacred Mountains” (the others being Mt Emei in Sichuan province, Putuo in Zhejiang and Jiuhua in Anhui province).

Stretching in a broad arc around the village of Taihuai, Mt Wutai used to have over 200 temples, the first dating from around 630 AD. Now, some 108 remain, of which 47 are open to visitors.

At the base of the mountain and nearest to Taihuai village is Wuye Temple, which boasts a stage on which classical opera is performed in June during the annual Buddhist Festival.

To get to Mt Wutai from Taiyuan, capital of the province of Shanxi, you have to take a spectacularly tortuous “highway”, which winds north-east through increasingly barren landscapes, the narrow road twisting and turning upon itself like a drunken snake. Farmers here still wear Mao-style caps and jackets.

Finally we reach the South Peak of Wutaishan, from where a panoramic view of China’s greatest temple complex opens up in a far-off valley.

Emil S. Fischer, who visited Wutaishan way back in 1917 and wrote the book The Sacred Wu Tai Shan, published in Shanghai in 1925, mentioned staying overnight in Taiyuan Temple, “where the largest of all the White Bottle Pagodas stand”.

Some 30 years later, Mao Zedong, Chou En-Lai and other revolutionary leaders made a brief stay in the very same temple in April 1948. And 20 years after that, during the Cultural Revolution when the Red Guards zealously went about destroying ancient relics, the citizens of Taihuai intervened and, almost miraculously, prevented the destruction of the temples of Wutaishan.

But sadly, many of the very same villagers are now being moved out to a new settlement some 20km away, to make room for tourism development. The Shanxi provincial government is also spending big on road and rail infrastructure, with the existing 68 hotels rapidly being supplemented with new constructions.

Will the big increase in the number of visitors detract from Wutaishan’s unique charms?

Despite the long history of Wutaishan, tourism has only been possible since 1985. Last year, some three million domestic visitors and 18,000 foreign visitors (mainly from Japan and Europe) visited Mt Wutai.

With a multi-lane highway set to reduce the travel time from Beijing to a mere three hours — a far cry from the early 1900s, when it took Fischer three days to reach Mt Wutai — it’s a little disturbing to contemplate what “peak hour” on the mountain will be like once tourism numbers rise.

Near Taihuai Village, the Eight-Buddha Temple of Manjushri (Wuye Temple) is a fitting introduction to Wutaishan. But our exploration of the temple complex — on a day of sub-zero temperatures and dog-biting wind — starts at Bodhisattva Summit (Pusading Temple), at the highest point on the hill overlooking Taihuai village.

Pusading was built by Tibetan Buddhists between 471 AD and 499 AD at the behest of Emperor Zhu Yuanzhuang, founder of the Ming Dynasty and himself a former monk. He was keen to get the Tibetan and Mongolian minorities of the Chinese empire onside.

Fischer noted that “among those temples which are yet purely Lamaistic is the topmost and foremost of all in this Temple City, the Pu-Sa-Ting”.

Pu-Sa-Ting or Pusading (meaning “the abode of Manjushri”) stuns all the senses at once. The brilliantly coloured figures of the Medicine Buddha; of the figures of Tara and Guru Padmasambhava; and of the five wrathful deities including Mahakala and Yamantaka in Vajra Hall make such a powerful impression that the rest of the day passes in a kaleidoscope of swirling colours and sounds. 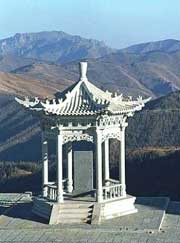 << A pavilion on Yedou Peak, the highest mountain in northern China.

On a steep stone staircase of 108 steps leading down from Pusading, devotees make prostrations during their ascent. Fischer described Mongol pilgrims “kneelingly crawling up all these steps in reverence”. There may now be more Tibetan than Mongol pilgrims, but the same air of reverence is evident even today.

Below Pusading, outside Xiantong Temple, a souvenir stall does a brisk trade. In this aspect, little seems to have changed since Fischer’s day.

“Trade on Mt Wutai is done only in silver ornaments and articles, to be used as gifts at services in the temples and as ornaments to take home,” he wrote.

The huge expanses of Xiantong Temple are mightily impressive in their impact. This huge temple compound of over 400 halls, pavilions and monks’ quarters is the oldest and largest at Wutaishan — and indeed the biggest in China after Beijing’s Temple of Heaven. It was built just one year after China’s oldest temple, the White Horse Temple of Henan province.

One of the most impressive of the halls is Mahavira Hall, featuring larger-than-life statues of the Buddhas Bhaisajya, Sakyamuni and Amitabha, with the bodhisattvas Manjushri, Avalokitesvare and Visvabhadra at the rear. The head monk welcomes our group, offering tea and a blessing. It’s hard not to be moved by the genuineness of the reception, as well as the sheer scale and size of the temple compound.

At the Tayuan Temple, home to the Great White Pagoda built by King Ashoka of India, I run into a yellow-hatted lama who seems to embody all the best Buddhist qualities, with a friendly manner and a grin as big as an aircraft-carrier deck. The temple incorporates a walking trail along which pilgrims circumambulate the compound, spinning trailside prayer wheels as they pass, and once more the air of devotion is nearly tangible.

Another temple lauded by Unesco is Foguang Temple, built at around the same time as Pusading Temple. At one time it was the biggest and most popular temple on Mt Wutai; however, during the mercifully brief reign of Emperor Wuzhong (845-847 AD), Buddhism was outlawed and nearly all the temple pavilions were destroyed.

Reconstruction commenced in 847, with the East Main Hall being supplemented by Manjusri Pavilion with its outstanding collection of vibrant murals.

Summing up, Unesco said of Mt Wutai: “Overall, the buildings on the site present a catalogue of the way Buddhist architecture developed and influenced palace building in China over more than one millennium. Mt Wutai, literally, the Five Terrace Mountain, is the highest mountain in northern China and is remarkable for its morphology characterized by precipitous sides with five open treeless peaks”.

It’s an impressive citation indeed, and no visitor to Mt Wutai should miss visiting the new government-sponsored Expo Centre of Mt Wutai, with its dioramic displays of the mountain and its history, as well as a movie theatre screening documentaries in several languages, including English.

“Mt Wutai has successfully combined the worship of Buddha and Boddhisattvas with the worship of natural mountains and landscapes,” says a display in the Expo Centre, adding that “Mt Wutai is the centre of the belief in the wisdom of Manjushri for Buddhism in the world”.

To a mere mortal visitor like myself, this statement neatly sums up the whole Mt Wutai experience.

Allow at least a couple of days to properly take in the sites of Mt Wutai. It’s best to avoid weekends. Admission to the temple area is 90 yuan (RM46).