A new star in the East: Combining French style and Buddhist calm in Luang Prabang

Luang Prabang, Laos -- Kahm began his story in such a way that you had no idea if the ending would be happy or sad. You just hoped for the best and feared the worst. 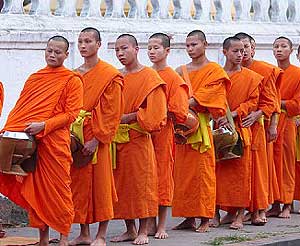 We were standing outside the Xieng Thong temple (built in 1560), sheltering from the sun, our bicycles propped up against a flaking wall.

For many years, Kahm, our guide, and his wife, had been desperate for a child. Finally, she became pregnant but, after six months, severe complications set in and she was told the only option was major surgery.

She would lose the baby, but her own life would be spared. Without the operation, mother and unborn child would both die.

'We came here to the secret chapel and the monks allowed us to go inside,' said Kahm. 'We spoke to the Buddha and also left some hand-written notes at his feet. Then we waited for what was going to happen.'

It was the 'waiting for what was going to happen' part of the story that worried me  -  the acceptance, no doubt with great grace and dignity, of the grim inevitable. Then his eyes welled up and he said: 'Five years ago, my wife gave birth to our daughter, and still the doctors have no explanation for it.' my eyes were welling up, too  -  but, then, the sprinklers had been going on and off throughout a wonderful week in Luang Prabang, the undoubted star of 21st-century Laos.

Once described as a 'holy grail for shoestring backpackers seeking higher truth', Luang Prabang now does chic with a Buddhist twist and it's impossible to leave here without feeling optimistic about the human race.

Designated a Unesco World heritage Site in 1995, ranking it right up there with other great treasures such as angkor Wat and the Great Wall of China, Luang Prabang has 33 temples (at one time there were 62) and 111 historic Lao-French buildings (the French presence lasted from 1893 to 1954).

Unesco deems it the best-preserved traditional town in South-East asia. But that's not the half of it. If there were a Unesco equivalent that monitored gentleness and humility, then the people of Luang Prabang would be held up as shining examples to the rest of the warring planet.

What makes the former Laos capital irresistible is that it's extraordinarily accessible.
There are really only three main roads, and the town is framed by the mighty mekong on one side and the sleepy Khan River on the other.

In between, there are little lanes, where restaurants, cookery schools, guest houses, bars, paper factories, rice-cake makers and artisans of all kinds beaver away, while monks in their golden robes holding sunsheltering umbrellas file purposefully past. actually, what really makes it irresistible is that it's not for everyone.

Some of my fellow countrymen wouldn't like the curfew at midnight because it means the bars close at 11.30pm. and some might find the natural decorum of the locals disarming at best, shaming at worst.

Even in the colourful night market that takes over most of the main street at dusk, there is no hard-sell, no pleading.

The opening of amantaka, an aman hotel, has upped the luxury, laidback ante. It occupies what used to be the town's hospital and we could not find a single thing to fault. We had read about aman junkies and now regard ourselves as addicts beyond redemption.

Luang Prabang is big on excursions. Choose wisely. We loved our dragon boat ride up the Mekong. We went as far as the Pak Ou caves, discovered in the 16th century when they were most likely centres for spirit worship. Today, they are filled with little Buddhas and, frankly, are over-rated.

On the return leg, as the sun was setting over the lush hills and as villagers came down to the waterfront with bars of soap to wash themselves and their clothes, we stopped at a small village where women were still toiling at their looms, selling beautiful scarves for £2.

We were embarrassed by asking for ten of them, but would have felt mean if we had opted for anything less. Back in town, the National Museum, housed in the former Royal Palace, is highly recommended. And you can hardly be in Luang Prabang without making the trek up to Wat Choum Si (there are 328 steps), which rewards you with commanding 360-degree views.

We passed on elephant riding in favour of a trip to Tat Kuang Si, an outrageously pretty spot 40 minutes from town. Here, you will find one waterfall after another tumbling over white limestone into multi-levelled turquoise pools, where you can swim and swing from ropes and generally get in touch with your inner Tarzan.

There's also a remarkable Asiatic black bear sanctuary on the way to the falls, run by a British couple.

All the bears have been rescued from the bad guys who kept them in tiny cages and had bile removed from their gall bladders to make traditional Chinese medicine. Until last year, there was a tiger here, too, but he died after reaching a ripe old age.

We felt longevity coursing through us in Luang Prabang. The food helped. Lao cooking is a blend of Chinese and Thai, with emphasis on local herbs.

Most days, we ate lunch at a stall by the side of the road for £1  -  spicy noodles with chicken and mushroom. L'Elephant, near the Mekong, is arguably the smartest place for dinner, with a mainly French menu.

At one point, sitting near the door watching the passing parade, we felt we could have been in swanky St Barts in the French Caribbean.

But the joy is that you are not in St Barts. You're in a country that has suffered terribly, but which has survived terribly well. You're in a town where people smile and where there's a natural sense of community.

How long Luang Prabang can be so engaging, so effortlessly life-affirming, is hard to say. But the message is clear: go sooner rather than later. This is travel of a different kind.

A week-long, tailor-made trip combining Laos and Bangkok with The Ultimate Travel Company (020 7386 4646, www.theultimatetravelcompany.co.uk) costs from £2,425 pp. This includes a five-day stay at Amantaka, in Luang Prabang, followed by two nights at the Mandarin Oriental in Bangkok, plus flights from Heathrow and private transfers throughout.