Zen and the art of mingling

London, UK -- What is the collective noun for a group of Buddhists. A meditation? A stupafaction? A dharmagation? Whatever, it was a rare gathering at Admiralty House on Whitehall this week where the leaders of the religion's various bodies in this country were brought together at the invitation of Sayeeda Warsi at a reception to celebrate the contribution of the Buddhist community to the UK. 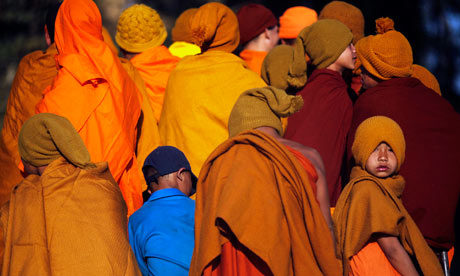 << Buddhist robes of all colours, such as these, were seen at Lady Warsi's reception for the community in London. Photograph: Reuters

One can view a room of Buddhist monks rather like an tube map – it's all about the colours. So here were the dark browns of the Zen robes, the decorative reds and golds of the Tibetan tradition and the various shades of orange and saffron of the Theravadan schools.

Here also were Burmese monks in their crimson robes, so familiar from the protests of 2007, as well as Zen priests from the Pure Land school, whose decorated brown robes looked faintly high church. Dotted among them, too, were two white-costumed Jain nuns and one brave, lone Zoroastrian.

This was always going to be a somewhat eccentric event, and so it proved – from the sight of monks producing mobiles from their robes to hand in at reception, to the choir of the London Buddhist Vihara in Chiswick who sang a happy-clappy song that sounded like a Sanskrit version of "I've got a never-ending love for you". And all of this taking place in grand, 18th-century rooms, beneath chandeliers and surrounded by enormous, gilt-framed naval paintings.

The final touch was the presence of so many members of the armed forces, all dressed to the nines, medals marching across their breasts, who gave the event a slightly Jewel in the Crown feel. Apparently, they were all members of the Armed Forces' Buddhist Society. Admit it, you didn't know it existed.

Climbing onto one of the sofas (ignoring the Cabinet Office sign which said: "In the interest of preserving this delicate antique, please refrain from sitting on or moving this furniture". Well, it didn't say anything about standing, I suppose), Lady Warsi welcomed everyone to the first event of this kind.

Afterwards, it was time for the monks to collect their phones and get back to their texts. As in the teachings, that is.