BUSSY-SAINT-GEORGES, France -- The final touches are being put on what will be Europe's largest Buddhist temple, complete with a 16-foot, 8-ton Buddha statue, officials says. 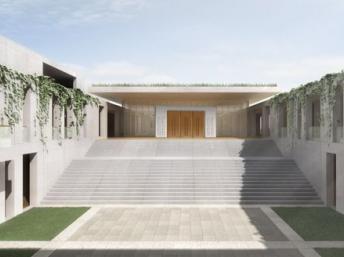 Along with space for 1,000 worshipers, the complex will have about 40 bedrooms for people on spiritual retreats, prayer rooms, space for meditation sessions, calligraphy workshops and other activities, and a vegetarian restaurant.

Designed by the Frederic Rolland architectural firm, the structure doesn't have the traditional pagoda-style most often-associated with Buddhist temples. Set on a large parcel filled with fruit trees, it is built mostly of glass, wood and unrefined concrete accented by roof gardens. In the main area is the massive Buddha made of white jade from a mountain in Myanmar.

"The statue was hewn directly into a mountain in Burma and then transported to the port of Marseilles, which at the time was on strike," architect Polly Rolland told RFI. "We had to organize a special convoy, and arrange cranes to position the Buddha inside the temple, before finishing the roof, because the statue wouldn't fit through the doors."

Rolland said the project was notable for harmony during its construction.

"Usually there are always arguments on a site, but this time, everything was managed in a spirit of total zen," the architect said.