Sri Lanka monk in for Germany on Dharmaduta work 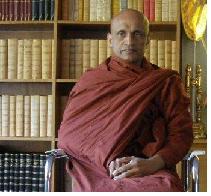 Ven. Seelasumana’s visit is being sponsored by the German Dharmaduta Society founded by Asoka Weeraratna in 1952.

Ven. Seelasumana Thera is a member of the Amarapura Siri Saddhammawansa Maha Nikaya. He obtained higher ordination (Upasampada) in 1976. He has a B.A. (Peradeniya), M.A. (Kelaniya), and a post – graduate Diploma in Education (University of Colombo).  Fifty – six –year old Ven. Seelasumana Thera, has served as a Principal of a Dhamma school and as a lecturer at the Vidyatunga Pirivena in Dickwella. He also conducts meditation classes at his Temple.

This is Ven. Seelasumana’s second spell at the Berlin Vihara. He has earlier served as a resident monk at the Vihara for a two year period from 2007 – 2009, and is familiar with the German language.

Since 1957, Buddhist monks from Sri Lanka and other countries have resided at the Berlin Vihara to propagate the Dhamma in Germany and other Western countries.

Das Buddhistiche Haus, prior to it being converted into a Vihara with resident monks, was purchased by Asoka Weeraratna in the name and on behalf of the Trustees of the German Dharmaduta Society in 1957 from the heirs of Dr. Paul Dahlke, a prolific writer and pioneer of Buddhism in Germany, who built and went into occupation of Das Buddhistische Haus in 1924. It is now a National Heritage site in Germany.