Rome, Italy -- While much of the international focus was on Pope Francis delivering his first Urbi et Orbi Easter Sunday address in Piazza S. Pietro, another significant religious event was taking place in the suburbs to the east of the capital. 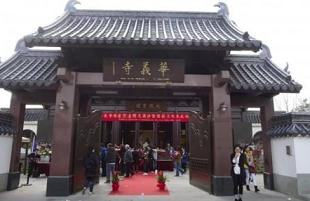 The largest Buddhist temple in Europe was inaugurated in Rome on 31 March in the presence of the city's mayor Gianni Alemanno, thousands of members of the capital's Chinese community, and Tibetan monks.

Located between warehouses on Via Omo in the Tor Tre Teste area, the “Hua Yi Si” temple is designed in the style of a pagoda.

It was funded by the city's Chinese community which Alemanno described as growing "in peace and harmony with the rest of Rome".

Alemanno hailed the temple as "another record of religious tolerance in our city. We already have the largest mosque in Europe and now this Buddhist temple."

The Chinese community living in the city and province of Rome is estimated to number between 5,000 and 7,000 people, with most of them coming from a specific area of ??the Zhejiang province in southern China.

In 2005 the first Chinese Buddhist temple in Europe opened on Via Ferruccio 8, near Piazza Vittorio in the Esquilino area of the city.

The Mosque of Rome is located in the Acqua Acetosa area, at the foot of the Monti Parioli, and it is also the seat of the Italian Islamic Cultural Centre. Designed by Italian architect Paolo Portoghesi, the project was financed by 23 Muslim countries including its main sponsor Saudi Arabia, and was inaugurated in 1995.