Stockholm, Sweden -- Raised with evening prayers, Martin became a vegetarian atheist before finding Buddhism. The most common misconception? That he's a monk, or that he has "tricks to not feeling bad". 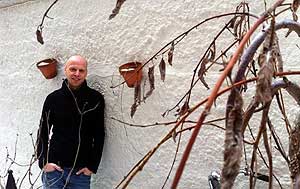 "I can feel that it's a bit provocative when I tell someone that I meditate, and they say 'Oh, it must be so nice to relax'," says Satyaprabha, pressing his index finger and thumb together to illustrate just how little relaxation has to do with meditation.

His irritation, however, is expressed in a mild-mannered and dry-humoured way.

”Being present is the primary thing when you meditate. Relaxation is often a positive side-effect of awareness, but it’s not guaranteed,” Satyaprabha elaborates. “It’s not about finding an off switch, but letting experience be paramount rather than trying to manipulate it.”

He’s rather accepting of misconceptions of Buddhism; Satyaprabha himself used to think that all Buddhists were monks and nuns, and his first real-life brush with the religion was a tourist stopover at a temple in Malaysia.

"I didn't even think it was particularly pretty, it was just weird and exotic," he recalls.

Martin, which was his name at the time, then headed south to Australia, spending most of his time in national parks. He took an active interest in ecology and ecosophy (the love of nature), and not until he was about 23 would he properly start to learn about Buddhism.

"It wasn't a head over heels kind of thing; there weren't fireworks. It happened quite gradually," he says.

"There had been very strong existential questions rattling about in me that Buddhism touched upon -- how to deal with life and reality as they are, not as you would like them to be," explains Satyapraba, now in his early thirties and working full-time at Stockholm's Buddhist Centre.

Rough attempts to count the number of active Buddhists in Sweden have settled on an estimate of 15,000, not including migrants from countries with strong Buddhist traditions.

Satyaprabha has noticed that many would-be converts he meets work with people; they include many social workers, psychologists, and health care professionals. Apart from that, he says there is no common denominator.

For himself, the desire to live a simple life was one inspiration.

"I never dreamed of a lot of money or expensive things, so maybe that was a bridge to Buddhism."

He became a vegetarian for environmental reasons long before his conversion, but thinks his interest in ecology ties in well with the Buddhist advice to think of and take responsibility for your actions.

Satyaprabha was raised in a small town outside Jönköping, in the area known as Sweden's bible belt. His family didn't attend church regularly but "mum and dad would make sure we said evening prayers".

As his own conversion happened gradually, so did his family's realization that his new religion was there to stay.

"I don't think I came home and said 'There's something I need to tell you!'," Satyaprabha recalls with a throaty laugh. "It took a while for my family to see that Buddhism wasn't a sect, that it was positive thing. And now it's more like 'That's what he does and that's fine… I guess'."

They are not, however, particularly interested in learning more.

"We really only need a few sheets of paper to tell us that everything continually changes ," he says about the intellectual bit of his new religion. "The big bit is to get our emotions to open up and accept that same truth."

"Buddhism requires a lot of patience. You don't turn into an emotional superhero overnight, but you might notice certain behaviours’ negative consequences and start to take responsibility for changing that," he says.

As far as spirituality in modern Sweden is concerned, Satyaprabha thinks the scales have tipped too far towards scientism.

“I don’t question science and research, it’s scientism I question,” he explains. “It’s so easy to get stuck in a polemic debate about “believing and knowing’.”

Rather than finding a foe in lab-coated scientists, it’s an overarching reliance on natural sciences as the key to understanding everything that Satyaprabha distances himself from.

"If there is no rational evidence, it's fiddlesticks," he summarizes. "It's as though we give the intellect a place in our lives and in our society that is far too big."

A person's emotional life deserves just as much curiosity and attention, Satyaprabha argues. Which raises the question: what do we learn in school?

"Our intellect invented the atomic bomb, but our emotions tell us whether to use it or not," he explains. "We are so far behind on an emotional level compared to how far we have come intellectually."

Quick to point out that he does not mean humans should look down on themselves for awful decisions in the past, Satyaprabha wants to look at how everything is connected, and how realizing that entails responsibility.

”Our lives are made up of billions upon billions of small decisions that, put together, shape our minds and how we act,” he says. “We have a responsibility to take care of each other. But that also means that we must sometimes do nothing. Absolutely nothing.”

”Just sit back and contemplate the universe,” he concludes.