Farewell ceremony in the village of Renchen in the Black Forest.

Renchen, Germany -- Several thousand Buddhists from all over the world met at Renchen in Germany to pay their last respects to His Holiness the 14th Kunzig Shamar Rinpoche. His Holiness the 17th Karmapa Thaye Dorje led the impressive farewell ceremony for his teacher. 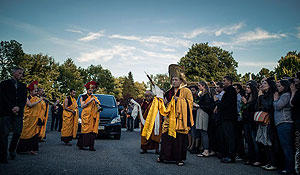 He will accompany Shamar Rinpoche on his last journey to India and several other Asian countries. Tens of thousands of Buddhists will bid him farewell there. Shamar Rinpoche himself did not fear death. In one of his last teachings he said: ”You don’t need to be afraid of death if you know how to practice [meditation] in death.”

Shamar Rinpoche died of a cardiac arrest on 11th June, at the age of 61 in the meditation center of his Bodhi Path organization in Renchen-Ulm. Shamar Rinpoche was, after Karmapa Thaye Dorje, the highest-ranking teacher in the Karma Kagyu tradition and one of the most important and influential representatives of Tibetan Buddhism. He taught worldwide and established various humanitarian foundations in Europe, the USA and Asia.

After his death, letters of condolence were received from many high masters of Tibetan Buddhism as well as the Royal Family of the Kingdom of Bhutan. ”I have known Rinpoche for many years and my family and I will always remember Shamar Rinpoche as a close and dear friend.” His Majesty Druk Gyalpo Jigme Singye Wangchuk, the 4th King of Bhutan, wrote.

Since the death of the 16th Karmapa in the year 1981, Shamar Rinpoche had continued the centuries-old Karma Kagyu school of Tibetan Buddhism. Today’s spiritual leader of that school, the 17th Karmapa Thaye Dorje, was recognized, brought out of Tibet and enthroned by Shamar Rinpoche in 1994.

With its more than 180 meditation and study centers, the Karma Kagyu is the most widespread Buddhist school in Germany. It is worldwide represented by more than 900 monasteries as well as meditation centers under the guidance of Karmapa Thaye Dorje.