Elmbridge, UK -- More than 200 people gathered on bank holiday Monday to send off message-bearing floating lanterns expressing wishes, intentions and commitments in a unique festival, held in the UK for the first time. 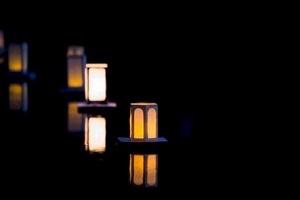 During the day, a series of meditation sessions, children's activities and inter-faith and inter-cultural workshops were held, attended by the mayor of Elmbridge, Councillor Barry Fairbank.

Those who attended the Shinnyo Lantern Floating Festival, held at the Buddhist Centre in Long Ditton, also floated one of the 100 lanterns cast on to the lake in remembrance of those lost during World War I, and in conflicts before and since.

Shohei Nishino, head of Shinnyo UK, said: "Lantern floating - which is a very special practice in Shinnyo Buddhism - is a beautiful, peaceful and inclusive rite and we are very happy that our local community and members of other faiths were able to share this moment with us.

"The lanterns we lit were in gratitude for the past, in appreciation of the present and with hope towards the future."