Hebburn, UK -- AROUND 300 people from the UK and abroad attended a Buddhist ceremony at Hebburn riverside. 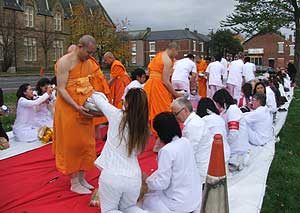 The kathin service saw Buddhists from throughout England and Scotland, plus visitors from Thailand, gathering at the former St Andrew’s Church, off Ellison Street.

Converted into a meditation centre last year, the temple will eventually become the main Buddhist centre in the North East and Scotland.

The biggest donor at the kathin ceremony was Sook Chatrat, from Bangkok, who with her two daughters presented the funds for replacing eight windows in the former Victorian church.

Spokesman Eddy Johnson said: “Before the service started at 9am, the church bells were rung for 10 minutes.

“For the first time in many years, the church had been decorated and fitted out temporarily for the service, and looked beautiful.

“The service started with meditation, and after that the first lesson was read by Kyle Stubbs, from South Shields, to be followed by lessons from many others.

“Paul Snowden, from the People’s Mission, in Newcastle, was very impressed with the service, which will be repeated next year.

“Three members of Northumbria Police attended, and also came to the next part of the service, which was the giving of gifts to the monks outside on the green area.”

Abbott Phra Pichit said he was “delighted” with the turnout at the service, which included around 30 people from the local community.