The local authorities have allocated more than $1.1 million to sponsor the restoration works

CHITA, Russia -- Monks of the Aginsky Datsan (datsan is a term used for Buddhist university monasteries in the Tibetan tradition of Gelukpa) in Russia’s TransBaikal Territory have begun to restore a giant 19th Century statue of Maitreya Buddha, or Buddha of the Future, Tatiana Zherebtsova, a deputy minister of culture of the TransBaikal Territory, told TASS on Tuesday. 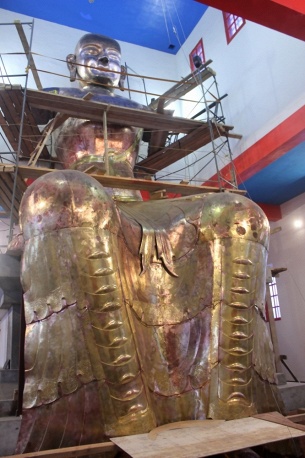 She said the local authorities have allocated more than $1.1 million to sponsor the restoration works. Aginsky Datsan monks will put together all remaining fragments of the 16-meter statue originally made by Chinese craftsmen and will make new elements to substitute for missing fragments.

Along with restoration, the monks will perform a sacred ritual of consecration in order to make the statue suitable for use in religious practices. They will put sacred objects - mantras, different crops, medicinal herbs, juniper leaves and small stupa-shaped clay votive object, which they believe are invested with spiritual power - inside the statue, the press service of the Aginsky Datsan said.

Specific attention will paid to a srog shin (life-stick, or soul-pole), a large cedar stick inscribed with Buddhist prayers in the center of the body. According to canonical texts, the entire consecration ritual is useless without this object.

Buddha Maitreya is the future Buddha to come. At present, Maitreya is a Bodhisattva who resides in the Tushita Heaven /The Garden of Joy/ awaiting the right moment, still in the distant future, to descend to earth and incarnate as the next, and last Buddha of this world with the purpose of bringing deliverance of all sentient beings. Buddha Maitreya is incorporated into all the major Buddhist traditions as a connecting link to the future.