Berlin, Germany -- The month of May is a busy month for all Buddhists living in Berlin. There are a number of events taking place to commemorate Vesak during this month. 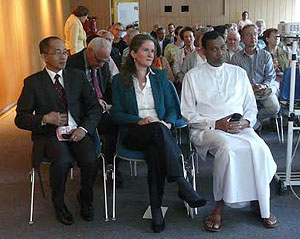 The Sri Lankan community held their Vesak celebration at the Buddhist Temple in Frohnau,  on the Fullmoon day, Sunday the 03rd May with a full day program including observing Sil, Dhana and Dhamma discussions. German and Sri Lankans who visit the Frohnau temple including the Sri Lankan Ambassador and Senaka Weeraratne, president of the German Dhammadutha Society in Colombo took part in these events.

The Sri Lanka Embassy in Berlin took a novel step this year to mark the significance of Vesak in collaboration with the Museum of Asian Art, State Museums in Berlin and the Sri Lankan community. It was an initiative by Ambassador Amunugama who together with the first secretary R. Kohularangan and the Embassy staff organized a Seminar on Buddhism to celebrate Vesak Day on wendsday the 06th May 2015.

The Embassy invited three established scholars on Buddhism to deliver talks. They were Prof. Eli Franco, Director of the Institute of Indology at the University of Leipzig. Dharmachari Amogharatna, Chairman of the organization “Buddhistisches Tor” in Berlin and Ms. Sylvia Wetzel, Chairman of the Buddhist Academy in Berlin.

The seminar began by observing the five precepts guided by Ven. Shantharakkhitha of the Buddhist Temple in Berlin. Prof. Dr. Klaas Ruitenbeek, Director of the Museum of Asian Art welcomed the participants and explained the importance and the relevance of this event to the Museum of Asian Art. The Museum displays many Buddhist artifacts in their permanent exhibition.

In the concluding remarks, Karunatilaka Amunugama, Ambassador of Sri Lanka to Germany stated that the Embassy organized the event with the Museum of Asian Art to provide an opportunity to the followers of Buddhism and the open minded people in Germany to learn about the philosophical aspects of Buddhism and the teaching of Lord Buddha and the Embassy wishes to assume a guiding role to organize similar intellectual discussions in the future.

The Ambassador thanked the speakers of the event, the Museum of Asian Art and the well wishers of this event for collaborating with the Embassy to make this event a success.

A reception with delicious Sri Lankan food prepared by the Embassy and Sri Lankan Tea was served to the participants, later.

BUBB organisers the German Vesak celebrations since 1988. They will be celebrating Vesak this year on Sunday the 17th May at the  Fo-Guang-Shan-Tempel Temple in Berlin. The celebrations will start at 10:00 in the morning and continue until 6.00 in the evening.