Tuva, Russia -- Russia's Federal Security Service has ordered the deportation of a Buddhist leader who has been practicing in Russian regions for over a decade, reportedly deeming him a threat to national security. 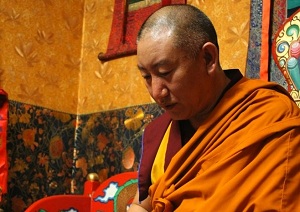 The decision to expel Buddhist lama Shiwalha Rinpoche prompted an outcry in Tuva, a predominantly Buddhist Russian republic on the border with Mongolia, and the regional governor, Sholban Kara-ool, appealed to the security agency, requesting they rescind the order, the FlashSiberia news portal reported Monday.

The Tuva branch of the Federal Security Service (FSB) has deemed Rinpoche's presence in the country “undesirable,” saying he presented a threat to Russian security, the Buddhist leader's supporters said on his website, shiwalha-rinpoche.ru.

“How can a man who teaches us love, compassion, and unselfish help to others be dangerous?” the statement said.

Under the FSB order, Rinpoche will be banned from ever re-entering Russia, the statement said, adding that his aide Lobsang Tsering was also being deported on the same terms.

Rinpoche arrived in Tuva 11 years ago at the invitation of the republic's Buddhist organizations, and “with the blessing” of the Dalai Lama, according to the statement.

He practiced in Tuva and other Russian regions with substantial Buddhist populations, helped build Buddhist stupas — places of meditation — and a Buddhist cultural center, receiving commendations for his work from local authorities, the statement said.

Tuva's government and Buddhist groups stressed that the decision to deport Rinpoche did not originate from the region's government, FlashSiberia reported.

“Tuva head Sholban Kara-ool shares the sincere worries of the believers and has submitted a request to consider the possibility of a different decision within the framework of current Russian law,” his office said in a statement, Flash Siberia reported.

The head of the Enerel foundation where Rinpoche had taught, Aneta Oorzhak, said supporters in Tuva and other regions have sent an appeal to Russian President Vladimir Putin to revoke the deportation order.

“The problem was not initiated by local authorities,” Oorzhak was quoted as saying. “Esteemed Shiwalha Rinpoche has done a great lot for Tuva. … During the 11 years of his work, he made a gift of the philosophy of Buddhism to believers [and] has done a lot for educational work, to help people know their religion.”