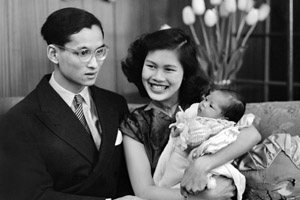 <<  Bhumibol in Switzerland. Snapshots of Bhumibol Adulyadej's Swiss stay as well as his official visit as King of Thailand in 1960. (Images: Keystone)

Around 250 people attended the special ceremony held at the Buddhist temple in Echallens in the canton of Vaud on Sunday to pay their respects to the former ruler of Thailand who died on October 13 at the age of 88.

The “Wat Buddhavihara” temple and Buddhist centre serves the spiritual needs of the resident Thai and Lao community. It was consecrated in 2001 and the building was chosen because it was near the city of Lausanne, where young Bhumibol spent many years.

Another ceremony in honour of Bhumibol was held in Gretzenbach in the northern Swiss canton of Solothurn. Around 200 people attended. Gretzenbach hosts the largest Buddhist temple in Switzerland, Wat Srinagarindravararam, whose construction was largely funded by Bhumibol's mother.

Bhumibol Adulyadej lived in Switzerland on and off between 1933 and 1951, in a villa in the town of Pully near Lausanne. He lived there with his mother, sister and brother Ananda Mahidol, who was king before him. The family often took holidays in cantons Valais and Graubünden.

Bhumibol was fascinated by photography, skiing, fast cars and nature. He received his baccalaureate at a cantonal school before studying natural sciences, law and political science at the University of Lausanne.

According to sources close to the family, his studies of the Swiss Constitution and democracy helped him develop Thailand’s democratic system. He also met his future wife in Lausanne, the current Queen Sirikit.
TOP