Kalmykia, Russia -- The journey from Volgograd (formerly Stalingrad) to Russia’s southern Republic of Kalmykia – a barren landscape the size of Scotland, wedged between Stavropol and Astrakhan on the coast of the Caspian Sea – is somewhat eerie. 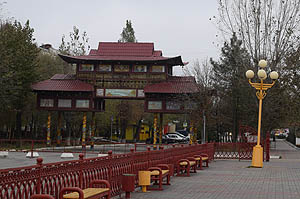 << In Russia’s Republic of Kalmykia, the remnants of Buddhism sit in the Soviet Union’s lingering shadow. The Diplomat profile pic

The landscape, once one of Europe’s most fertile, wouldn’t look out of place on Mars after disastrous Soviet agricultural policies earned it the dubious honor of “world’s largest man-made desert” in the 1950s.

Now, between the ramshackle crumbling wooden houses plonked into dirt, camels wander freely, comically standing next to rusting Ladas – an echo of new, partially successful attempts to raise camels on the desert terrain as a source of income.

Kalmykia is Europe’s only Buddhist Republic. The region’s people are descended from the nomads who wandered the vast Central Asian steppes under Genghis Khan’s empire. When the empire began to collapse, the Kalmykians migrated toward the Caspian Sea settling what is today called Kalmykia – Kalmyk means “remnant” in the local language.

As our marshrutka sputtered into Elista, the region’s capital, the shadows of the former Soviet Empire became apparent. The usual imposing housing blocks, with balconies on the verge of collapse, stand jaggedly in the dusty landscape with national motifs giving them some local flavor.

Recent history has been harsh for the Kalmyk people, and it continues to haunt the local monuments to both World War II and the Soviet-Afghan War. The former was particularly disastrous, with Stalin accusing the Kalmyk people of Nazi collaboration and banishing the Kalmyks to Siberia. The date was December 28, 1943 and it is still solemnly remembered by local residents who light candles each year in memory of the thousands who perished.

Walking through Elista immediately conjures memories of the societies at the other side of the Caspian Sea in Central Asia, a region that feels much closer than its geography would suggest. Indeed, the capital’s modern façade is the triumph of ego over nature – more specifically, the ego of the Republic’s former dictator, Ilyumzhinov.

The millionaire Ilyumzhinov was elected president in 1993 and quickly turned the impoverished region into a tax haven, where Russian companies would register but contribute little to the local economy. Under Ilyumzhinov’s guidance, the capital came to resemble his personal ambitions.

Near the outskirts of Elista is a statue to the satirical Soviet novel The Twelve Chairs – a favorite of Ilyumzhinov – and so, naturally, monuments of the novel’s characters pepper the city. These dull in comparison with the more ambitious project shining in the dirt on the horizon – Chess City.

Like an Olympic Village, the city was intended to host international chess events – another of Ilyumzhinov’s passions. Reality was underwhelming. The buildings are now mostly empty and decrepit but the Chess Palace was surprisingly active. When you enter the brightly lit, open space life-size chess boards decorate the floors, with a bustle of guests purchasing souvenirs on the bottom floor.

Upstairs a tournament is taking place. Hundreds of Kalmykian children sit at tables, faces frowning in concentration as they write down their moves on notebooks. Parents sit nearby, looking on with interest.

Soon after he came to power, Ilyumzhinov set out to turn the region into the chess center of the world, making the study of chess a compulsory class for every student. Watching the event, one can’t help but be impressed by the passion the small tournament evokes among the spectators, many of whom are eagerly discussing opening gambits over traditional milk tea.

In spite of its troubled history and rampant corruption, Kalmykia remains one of Russia’s most culturally dynamic regions.

-----------------
Bradley Jardine is a journalist and researcher from Glasgow, Scotland. He is currently based in Moscow as part of the Alfa Fellowship Program
TOP