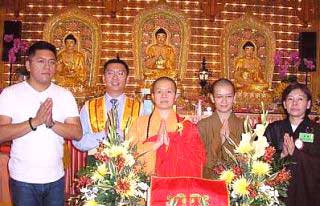 Mystical and intriguing to some, rigorously practised by others, the festival is still widely celebrated in Malaysia, particularly by Taoists.

And what about erecting giant effigies of the King of Hades at Trafalgar Square to watch over the restless souls set free from hell? So, can London face up to the ghostly threat while still on security alert following the terrorist bombings recently?

A resounding “no” of course – the authorities will certainly not take kindly to such chilly scenes unfolding in the British capital.

This is not Halloween. Welcome to the Chinese version of a festival rooted in superstitious beliefs of age-old rituals and ghostly beings from the nether world.

Ranging from sombre rituals to street prayers and offerings, the elaborate ceremonies for departed ones provide a fascinating insight into the diverse cultures of the Chinese community.

During the Seventh Month of the Lunar Chinese Calendar (usually August), entire roads, especially in Penang, are sealed off for street operas or modern concerts featuring pop singers and recording artistes to “entertain” the lost souls.

According to superstitious beliefs, the Gates of Hell are thrown open during the whole month, allowing the hungry ghosts to roam the earth and feast on sumptuous offerings by devotees.

The festival is also celebrated in London, albeit in a more subtle manner by the Chinese community observing the Mahayana tradition.

Instead of street operas and lavish feasts, special prayers are held and vegetarian meals offered to mark the month of filial piety for departed ones.

The London Fo Guang Temple’s four-day Ullambana Dharma function is a typical example, in which merits accrued are transferred to the deceased and benefit the living with virtue and wisdom.

Interestingly, the Sanskrit word Ullambana means “an upside down container” – symbolising the sufferings of hungry ghosts when strung upside down.

Temple head Ven Chueh Yann explained that the prayers were not really meant for hungry ghosts as the departed ones might not necessarily be reborn in that realm.

“We must not have the wrong concept, as those who die can be reborn in any of the six realms,” said the nun from Muar, Johor. The six realms are heaven, asura (demon), human, animal, hungry ghost and hell, based on the Mahayana tradition.

Ven Chueh said those who observed the practice of offering food to hungry ghosts had no doubt shown their compassion for the poor souls. “In Buddhism, we not only offer food but also chant sutras to transfer merits to them which is more beneficial,” she said.

Ven Chueh said the Purification Ritual, Repentance Litany of Liang Emperor and Thrice Yearning Service were conducted during the Dharma function. More than 250 devotees, including many Malaysian students and working professionals, attended the prayer session at the temple recently.

Ven Chueh, who received her Dharma training at the Fo Guang Shan Monastery in Taiwan, said she was particularly happy to see so many devotees from Malaysia fulfilling their religious obligations.

“While in London, it’s good they can still practise Buddhism as well as carry out welfare work at the temple,” she added.

Set up in 1992 by its parent monastery, the temple conducts regular services and organises cultural, educational and charitable works with its affiliate, the Buddha’s Light International Association (BLIA).

Renovated from a conservation listed building, the temple at 84, Margaret Street, near London’s Chinatown, is reputedly the biggest Mahayana temple in the city.

The main shrine dedicated to Sakyamuni Buddha, Medicine Buddha and Amitabha Buddha as well as the second and third shrines of Kuan Yin and Ti Tsang Bodhisattva of Great Commitments are located on the first floor, while the Meditation Hall is on the second floor.

The building also houses a Dharma library and a reception area with souvenirs and Buddhist publications.

“We have just started providing Dharma counselling for illegal immigrants at detention centres in Gatwick, Bedford and Heathrow. We try to help them in whatever way we can,” he said, adding that most of the detainees were from China and had no proper documents with which to enter the country.

Chan, from Ipoh, said the devotees came from as far as Scotland, Liverpool, Birmingham, Oxford, Cambridge and Windsor to take part in their activities and temple functions.

Apart from Malaysians, the other devotees are from China, Taiwan, Singapore, Hong Kong, Indonesia, Vietnam and Laos.

Advocating the promotion of humanistic Buddhism, both the temple and BLIA are actively encouraging the practice of the Dharma in the people’s daily lives.

Whether it is Buddhism, Christianity, Islam or Hinduism, all religions that promote national and world peace certainly deserve the highest commendation.