BRUSSELS, Belgium -- The Dalai Lama on Friday called for an end to "corruption of the highest level" and dirty tricks between large nuclear powers at the United Nations, so the global body can better fight poverty and end conflicts, notably in Africa. 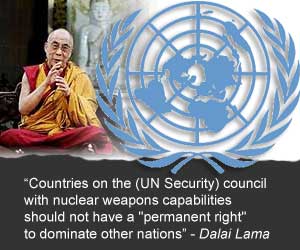 In a rare statement of criticism, the spiritual Buddhist leader called for reform of the 191-nation organization, calling the current system outdated and unable to reflect the reality of today's world.

He said with the growth of United Nations membership, having only five permanent Security Council members is "undemocratic."

He added that countries on the council with nuclear weapons capabilities should not have a "permanent right" to dominate other nations. "This is wrong," the Dalai Lama told a news conference. He also said with the UN being "a body of the governments, so not necessarily the body of humanity," representatives there are "always making tricks" and the poor people suffer in the end. "Look at Africa, Darfur," the Dalai Lama said.

"The United Nations are a structure, it's a political sort of authority, they are representatives of the governments, so then unfortunately behind the scenes they are always making tricks," said the Dalai Lama.

"I think some kind of corruption of the highest level ... and the poor people suffer, look at Africa, Darfur."