World's biggest Buddhist mantra made of stones on Tuvan mountain

Tuva, Russia -- Gyudmed Tantric Monastery monks, who are on a visit in Tuva, have finished their work at the world's biggest Buddhist mantra. In the opinion of all the participants of the unique project, the mantra is to hasten the visit of His Holiness Dalai Lama to the republic. 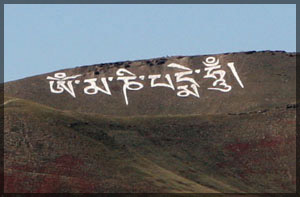 The mantra of Chenrezig, the Buddha of Compassion, "Om mani padme hum" is made of huge stones on the side of Dogee Mountain, known as Lenin Peak. One can have a picturesque view on Kyzyl, the capital of Tuva, from the top of this mountain, IA Tuva-Online reports.

The length of the holy mantra is 120 m. It took 500 kilos of white paint to paint the stones. 'Tibetan Buddhists usually engrave holy mantras on the stones. A great many of them can be seen on the mountainous slopes and passes, as Tupten Shakia, the monk group leader, explained. However, there is hardly such a huge mantra made of big stones even in Tibet, he noted.

The tradition of writing of stones on the mountainous slopes was spread in the Soviet times. Schoolchildren and students wrote the motto "Glory to the CPSS!" on the even slopes. One could have read the name of Lenin on the top of the mountain, which could be seen well from any place in Kyzyl, recently. In the 90s the word "Lenin" was changed into "Dogee", which was the real name of the mountain, as Tuvan perestroika apologists believed.

The mantra "om mani padme hum" is not a mere prayer to Buddha of Compassion. In accordance with Buddhist holy texts, it has the holy power of his blessing and love. In this sense a mantra, either written or pronounced, is the god itself, which revealed itself in this world to help all the creatures. 'Everyone who can see, hear or read this holy mantra gets blessing from the Buddha of Compassion,' Tupten Shakia says, 'And the wind, which touches the stones making the mantra on Dogee slope will carry its blessing further as a gift to all the life forms on its way.'

The mantra construction of the Buddha of Compassion, whose embodiment on the Earth is His Holiness Dalai Lama, started when the spiritual leader of the Buddhists visited Mongolia, the neighboring country. The mantra capable of accumulation and spreading of the tremendous positive energy was built with a wish of longevity to Dalai Lama and prayers for spiritual merits of Tuvan people to help to remove the obstacles preventing the meeting of Buddhist Tuva with its spiritual teacher.

It is worth mentioning that Tibetan monks of Gyudmed Monastery arrived in Tuva by invitation of Kamba Lama Spiritual Directorate of the republic and the public fund "Enerel" (Compassion), which took up coordination of construction works of the mantra a bid prayer drum, which is to be erected on the central square in Kyzyl soon.