'Bring back our lucky Buddha'

Hertfordshire, UK -- A BUDDHIST mother and her daughters are desperate for a stone Buddha stolen from their garden to be returned safe and sound. 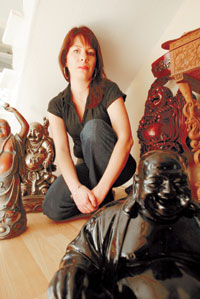 << Beverley Lewis with some of her other Buddha statues.

Beverley, who has been a Buddhist since the age of 21, says the statue had had a spell put on it to protect the family's home and health.

She said: "I've been collecting all sorts of buddhas from around the world for years and I bought Shyakamuni while I was on a break in the Isle of Wight.

"The woman who had the stall that I bought it from was a white witch who could enrich and put spells on the things you bought from her.

"She put a spell on him to protect our home and property and bring us health and wealth.

"Money's not been too bad and we're all healthy and I do feel we've been protected.

"But she said he would protect us as long as he stayed in the position we put him in and he's been there for two years.

"I'm not too worried about the spell being broken, as being a Buddhist I know he is just a symbol, but I wouldn't like to be the person that had taken him."

She said: "I reported it to the police but because it's a garden ornament there's not a lot they can do.

"I'm just hoping that maybe he's been thrown in someone else's garden and maybe we can get him back.

"I know they're replaceable but they mean a lot. You wouldn't go into a church and steal a crucifix would you?"