Head of the London Buddhist Vihara passes away

London, United Kingdom -- Most Ven Dr Medagama Vajiragnana, the Head of the London Buddhist Vihara and the Chief Sangha Nayaka of Great Britain, passed away today 15th December 2006 at 09.15 am (London time) at the Hammersmith Hospital, London. He was 78.

Most Ven. Dr. Vajiragnana was born in Sri Lanka in 1928. He was ordained as a novice monk (bhikkhu) in the village temple of Hippola on 23 March 1943 at the age of 14 years and received his higher ordination at the Malwatuvihara in Kandy on 11 May 1949 at the age of 20. He received his initial monastic education at Hippola, before proceeding to the Pratiraja Pirivena in Agalawatte for two years of further studies, followed by nine years at the Vidyodaya Pirivena in Colombo. In 1955 he attained the degree of Pandit from the Oriental Studies Society. He then studied for two years at the Pirivena Teachers’ Training College in Ratmalana, after which he was offered the post of principal at the Parama Dhamma Cetiya Pirivena in Ratmalana.

In 1961 he continued his education in India, completing a two-year diploma course at the Sanskrit University of Benares, and an M.A. in Sanskrit at the Jadavpur University of Calcutta. He returned to Sri Lanka to continue to teach at the Pirivena Teachers' Training College in Ratmalana.

In 1966 he came to Europe for the first time, when he was appointed as Assistant Head of the London Buddhist Vihara, by the Anagarika Dharmapala Trust, which is the oldest Buddhist monastic institution in the West. He was now faced with the considerable challenge of teaching Buddhism in what was, for him, a foreign language (English) in a country where Buddhism was little known, little understood and certainly not the dominant force it was in Sri Lanka. Despite the many differences in culture and language, Ven. Vajiragnana established a programme of classes in Buddhism and the Pali language which attracted much interest from native British people who were not born as Buddhists. In 1974 he became the religious director of the British Buddhist Association. In 1980 he was invited to return to Sri Lanka as the principal of the Pirivena Teachers' Training College in Ratmalana. Then in 1984 he came back to the United Kingdom as Head of the London Buddhist Vihara. One of his first duties was to revive and expand the teaching programme, and 1986 he was invited to start teaching a course on Buddhism at Birkbeck College, which is the extra-mural department of the University of London.

Throughout his time in the U.K., Ven. Dr. Vajiragnana has worked tirelessly to spread the Buddha’s teachings throughout the Western world, constantly emphasising the Buddhist virtues of tolerance and respect for the beliefs of others. In 1987 he was invited to become a founder member of the InterFaith Network for the U.K. Its aim is to promote and develop mutual tolerance and respect between the different faiths and philosophies followed by the varied communities living in the United Kingdom. It incorporates nine major religions: Bah'ai, Buddhism, Christianity, Hinduism, Islam, Jainism, Judaism, Sikhism and Zoroastrianism. He has played a leading role in establishing it at local, regional and national levels, linking together 80 organisations, including representative bodies from all these faiths. In addition to being a founder member, he has served on the executive committee and as a trustee. He was also appointed as Co-Vice-Chairman in recognition of his dedicated service and he regards this as one of the most important aspects of his work. 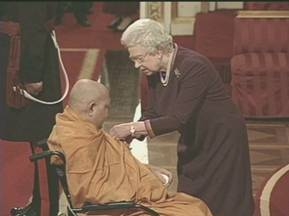 For 20 years he has represented the Buddhist faith at the annual Commonwealth Day Observance in Westminster Abbey. He has also been asked to represent the community at royal functions, such as the celebration of H.M the Queen's Golden Jubilee and the 100th birthday celebrations of Her Majesty Queen Elizabeth the Queen Mother. He was a guest at the enthronement of the Rt. Rev. George Carey as Archbishop of Canterbury in 1991, the opening Service of the 13th Lambeth Conference in Canterbury in 1998 and had many, informal meetings with Dr. Carey to discuss interfaith matters. He was also invited by Prime Minister Rt. Hon. Tony Blair MP to attend an emergency meeting of religious leaders to discuss matters relating to the religious and political disturbances arising from the destruction caused in America on the 11th of September 2001. He has represented the Buddhist community at the annual Remembrance Day service at the Cenotaph in Whitehall.

Ven. Dr. Vajiragnana has been in constant demand to give talks not only in the U.K., but also in many other parts of the world. In 1987 he was invited to participate in an Interfaith seminar on peace in Rome organised by the Catholic Church. In 1996 he attended the Gethsemane Encounter - a dialogue on the spiritual life between Buddhist and Christian Monastics in Gethsemane Abbey, Kentucky, USA. He has attended many meetings of the Buddhist-Christian Dialogue at the University of Purdue in Kentucky, USA.

In 1999 he was instrumental in founding The Rahula Trust, a charity aimed at helping deserving children receive a good education, no matter what their culture or religion. This is now helping several hundred children in Sri Lanka, Nepal and Kenya. He is the author of many books, pamphlets and articles concerning all aspects of the Buddhist faith.

In the New Year’s Honours List 2006, Most Venerable Dr. M. Vajiragnana was appointed O.B.E. for his services to inter-faith relations. This is in recognition of the many years of service which he has devoted to improving understanding between followers of all faiths, and spreading greater toleration and harmony between all communities.

The Cremation will be held in London and arrangements will be notified later.