Buddhist base continues to grow

Eskdalemuir, Scotland (UK) -- Turn a corner on a rural road in Dumfries and Galloway and what might you expect to find? Some sheep, perhaps, or a wind turbine or two - but probably not an enormous development for Buddhist study. 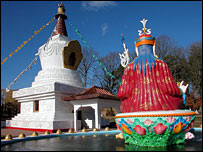 << The Tibetan centre has grown significantly over the last 40 years

Yet the Samye Ling Tibetan centre and monastery at Eskdalemuir has become an integral part of the region's landscape. This year it is celebrating the 40th anniversary of its outpost in the south west of Scotland.

It was back in 1967 that the founder Akong Rinpoche bought Johnston House on the outskirts of the village to establish a centre for the study of Buddhism.

Four decades on and he is still there. He recalls quite clearly the consternation of the local community when they first arrived.

"When they heard it was Tibetan people they thought it was maybe like witchcraft," he admitted.

"Especially when they heard we did not believe in God - I think they were very upset because they did not have much knowledge of Buddhism. "It has taken many, many years to understand each other."

Certainly, the centre has grown beyond recognition on its remote site.

There are now accommodation blocks for visiting students, a retreat centre for serious Buddhist study and meditation, and the temple which took 10 years to construct. Buddhist nun Ani Rinchen Khandro says the development of the site has mirrored demand.

"I just never ends - it started with Johnston House then that became too small for the number of people wanting to meditate and study Buddhism," she said. "Then they built the temple which is huge.

"You can get 500 people in the temple when it is fully opened up."

It would appear that the growth of the centre is likely to continue for some time to come. "Even the temple is not finished," said Ani Rinchen Khandro. "We have one section of it that still remains to be built - that is the educational centre.

"That will be the next big thing."

Which all means the locals will have a few more years to get used to having a major Buddhist centre on their doorstep.