Berlin Vihare - Gateway of Buddhism to the German world

Berlin, Germany -- 50 years is a long time and it is highly commendable, that Das Buddhistische Haus (The Berlin Vihare) has withstood the passage of time and the challenges and continued to serve the noble ideals of the “visionaries” who stepped in to fill a void, a void of spirituality in the German world soon after the trauma of the 2nd World War. 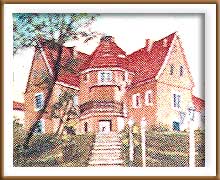 The Buddhist world would naturally wish to see Das Buddhistische Haus in Berlin, grow from strength to strength and continue to provide an environment conducive for Germans and the German speaking people, to study, discuss and enjoy the profound philosophy of Lord Buddha through which, they will inevitably find solace and inner peace for themselves and those around them. In the modern competitive world of commercialism, many are the people who wish to get away from it all and seek peace of mind. The Berlin Vihare must take up the challenge and continue it’s noble cause for another 50-100 years or more!

At a time when The Berlin Vihare is celebrating it’s 50th Anniversary which fell on 15th June 2007, there has been “a storm” in the form of a communication among individuals who, in one way or another are involved in Buddhist work in Germany and abroad that has lasted almost through the whole month of June.

The “storm” was initiated by Dr.Marianne Wachs when she accused Ven.Nyanatilloka Maha Thero of being a Nazi sympathizer who discriminated against Jews-these statements made by her were obviously distorted information she received or rather that she was being used by a hidden hand for whatever purpose. The Buddha has taught us, to verify what we hear and accept only if we are convinced that it is the truth-He has never advised us to accept speculations or hearsay!

Whatever the purpose may be, it was most heartening to note in the “Asian Tribune” of 20th June, that Dr.Wachs had realized the grave mistake she made and tendered an apology to the Theravada Buddhists. If we are practicing Buddhists we need to accept her apology if it is given in all sincerity and hope that similar mistakes are not made in the future.

There is no necessity to quote from The Buddha Dhamma because all those who contributed towards the dialogue that followed are scholars in Buddhism or involved in Buddhist work. One noteworthy fact that surfaced was that the majority of those who championed and defended the late German Monks Nyanatilloka Maha Thero and Nyanaponika Thero and helped to set the records straight were mostly living on German soil who appreciated the great contributions of the late Monks. This indeed, is the strength of Buddhism in Germany! We are indeed grateful to Ven.Bhikku Bodhi (an American)who had the privilege of working extremely closely with Ven. Nyanaponika Thero with BPS work and at the Forest Hermitage in Udawattekale, Kandy for having explained clearly the roles played by the above mentioned erudite German Buddhist scholars who left an indelible mark in the dissemination of The Buddha Dhamma to the Germans and German speaking westerners. These contributions cannot be erased from history as was exhibited by the manner in which German Buddhists came forward to defend the late Venerable Monks and the role played by The Berlin Vihare during the past 50 years.

Through a period of 50 years, there are bound to be ups and downs in the running of any organization and certainly, there can be improvements in the future. From the outside, any individual trying to understand the workings of either The Berlin Vihare or The German Dharmadutha Society may find it difficult to understand in its entirety, operational problems that may crop up from time to time. It is important for individuals to try and understand and offer whatever assistance we can, to solve such problems. We must not in anyway attempt to speculate or create dissention because that is not the Buddhist way-Lord Buddha always came forward to “solve problems but never to create them.” Therefore, our fervent wish as Buddhists is that we learn from past mistakes, correct them and move forward to serve the noble cause of Buddhism with even greater fervour.

In this endeavour, we expect the German Dharmadutha Society to make deeper and even better efforts to made Das Buddhistische Haus or The Berlin Vihare, into a still better environment for the study & research, practice as well as the dissemination of The Buddha Dhamma to the German world. The Berlin Vihara must continue to be the gateway through which Buddhism reaches out to German public.

It is noted with sadness the viewpoints of Lakshman Perera who has come forward as spokesman for “Buddhist Forum Berlin” (established only in March 2007) who hopes either overtly or covertly, to transform The Berlin Vihare into a multi-cultural/multi religious centre as we note from statements in their website! “Multi-cultural” means that it will also be used for “multi-religious” activities! “Forums” may be established and they may also be dismantled, but The Berlin Vihare and The German Dharmadutha Society have been in existence for 50 years.

Was that the original “vision” of the founding members? There is absolutely no doubt whatsoever, that this will be the greatest disservice a “Buddhist Forum” could do to the cause of Buddhism in Germany. Moreover, it is totally in contravention to the original vision of personalities such as Dr. Paul Dhalke, Arthur Schopenhauer, Dr.Schmidt, Freidrich Moller who became an Upasake under the tutelage of late Ven.Nyanatilloka Maha Thero, Asoka Weeraratne (later ordained as Ven.Dhammanisanthi Thero) whose tireless efforts resulted in the establishment of The German Dharmadutha Society as well as The Berlin Vihare, with Most Ven.Nyanatilloka Maha Thero being appointed as its First Patron Monk.

It takes many years for a seed to grow into a plant, from a plant to grow into a full fledged tree which bears flowers and fruits. The German Dharmadutha Society and Das Buddhistische Haus (The Berlin Vihare) have both grown into “full fledged trees” and the “flowers and fruits” have been enjoyed for 50 years by those keen on understanding The Buddha Dhamma, enjoying the fruits of proper practice and research for Germans and the German speaking western world. The “branches of this massive tree” have now spread throughout Germany and there is no turning back! With the marking of the 50th Anniversary in the year 2007, the time may be ripe to “prune the branches of this tree”, fertilize and nurture it with new vigour for it to sprout new branches and prosper for another 50 years or more. No individual or “Forum” with hidden agendas, should be allowed to “lop the trunk” and kill the tree! The onerous task of protecting and nurturing, is left in the hands of “genuine and sincere”German Buddhists and Scholars who must unite with the German Dharmadutha Society to move towards new heights to build a stronger and better environment for Buddhist studies and research. Sincere efforts will bear fruit with the Blessings of The Noble Triple Gem!

The Berlin Vihare must continue to be the gateway for further dissemination of Buddhism to the German world, for many more years to come-maybe another 50 years or even more!