Hamburg, Germany -- The Dalai Lama called on wealthy nations Friday to show more responsibility to poorer countries amid criticism from China over his visit to Germany. 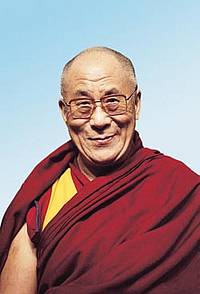 "We live in one world and we have to pay more attention to how we can narrow the gap between rich and poor," the spiritual and secular leader of Tibetans told a news conference in Hamburg.

"It is the responsibility of rich nations to do more. Creating charitable foundations, for example," said the 72-year-old, citing the example of US billionaire philanthropist Bill Gates.

The Microsoft chairman has donated large amounts of money to various charitable organizations and scientific research programmes through the Bill and Melinda Gates Foundation, established in 2000.

"The world's problems will increase as long as there is a desire to maximise profits," said the Dalai Lama, who arrived Thursday on a 10-day visit during he will deliver a series of lectures.

Criticizing Western consumerism, he urged people to reflect more on their core values, saying it would "make us happier."

In addition to his lectures, the Tibetan spiritual leader will deliver the keynote speech at a conference of Buddhist nuns organized by the University of Hamburg.

The Dalai Lama, who was awarded the Nobel peace prize in 1989 for his efforts to achieve a non-violent solution to the Tibetan problem, will also take part in a panel discussion on "Learning peace - the practice of non-violence."

In Beijing, the Chinese Foreign Ministry accused the Dalai Lama of trying to divide Tibet and warned Germany not to give him "a platform to conduct his separatist activities."

It also demanded that no German government officials be allowed to meet with the Tibetan leader "in order to maintain the healthy and stable development of Sino-German relations."

"The Dalai Lama is not simply a religious personality, but a political exile with a long history of involvement in separatist activities," the statement added.

Highlight of the visit, the Dalai Lama's fifth to Hamburg, is a series of lectures he is to deliver at the weekend to some 30,000 Buddhists from around the world at the Hamburg tennis stadium.

A charismatic figure and noted public speaker, the Dalai Lama will be talking about "Compassion in the globalized world" and discuss the 400 Verses of Indian master Aryadeva.