Tyva, Russia -- Spirituality runs deep in the remote Russian republic of Tyva. While shamanism is the unofficial religion there, Lamaism, or Tibetan Buddhism, is its official. But most people don’t have to choose between the two, since shamans and lamas don’t have a grudge against each other. 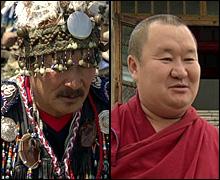 << Tyvinians don’t have to choose between shamans and lamas

Tyva is located South Siberia, in one of the most isolated regions of Russia. Its people’s native religion is shamanism – a belief in spirits inhabiting everything around them.

Going to a shaman is as common for Tyvinians as going to a doctor. But nowadays Tyvinian shamans don’t live in woods. They drive cars, live in normal houses and even pay taxes as private entrepreneurs.

Shamans are said to have special powers, and are connected to the invisible world of spirits. They act as mediums between this world and ordinary people. That’s why they can heal and make divinations.

Offering to the spirits is an obligatory part of any ritual and is meant to please them. Anything can be an offering, from a head of a sheep up to a whole animal, depending on how big a help you ask from the spirits.

A flat drum called dungur is essential for any Tyvian shaman. For him the instrument is a horse that gives him legs to travel to the spirits’ world during the ritual, and the faster he beat, the faster the horse runs.

Yet there is always another place where Tyvinians normally go for spiritual aid – Buddhist temples. They say it’s a wise thing to do: “I always go to both lamas and shamans, because they both help. With the two powers there will be more luck,” explains Nadezhda, a visitor of a Buddhist temple in Kyzyl, the capital of Tyva.

There is no rivalry between the two religions in Tyva. Lamas sometimes advise people to go to shamans, and shamans may come to Buddhist temples to pray there.

It’s no surprise. The fundamental values of both shamanism and Buddhism depend of the principle of respect for nature, and they say it doesn’t matter who you go to as long as you live in harmony with the world and yourself.