Eskdalemuir, Scotland -- The conduct of councillors who opted not to take part in a Buddhist prayer before a meeting is to be reported to the Standards Commission for Scotland. 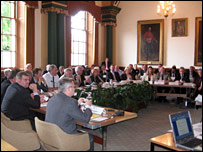 << Council chamber
The blessing was given in the main council chamber. The councillors declined to take part in a Buddhist prayer

Three Conservative members of Dumfries and Galloway Council said they made the decision on religious grounds.

The prayer and blessing were to mark the 40th anniversary of the Samye Ling Monastery at Eskdalemuir.

"Councillors swear an oath upon taking office to represent their constituents irrespective of race, colour or creed," said Mr Brown.

He said he did not see how the councillors could reconcile that with the stance they had taken.

"I think the best way forward would be for these councillors to find some way to offer some apology," he said.

The three councillors who stayed away were Denis Male, Roberta Tuckfield and Gail MacGregor.

Mr Male said he was surprised to find that there was a bid to take him to the Standards Commission.

He said his faith would not allow him to sit through the prayer.

"I am a Christian, born again in the faith of my Lord Jesus Christ who I believe died on the cross and shed his blood to absolve me of my sin," he said.

"I also believe he was resurrected and that gave me eternal life.

"With that, I cannot sit and accept a prayer by another denomination for me - it is just not possible because I am a Christian."

However, he said he would continue to serve all his constituents regardless of their beliefs as he had always done.

Buddhist nun Ani Rinchen Khandro at the Samye Ling centre said it was a "shame" that the "embarrassing situation" had developed.

She added that the councillors were entitled to stay away but she was surprised that they had chosen to do so.

"It's a little bit impolite, perhaps, but of course it is their choice," she said.

"I would have thought that that would apply to people of all religions."