TURIN, Italy -- The Dalai Lama on Sunday wrapped up a private 11-day visit to Italy during which he met fellow Nobel peace prize laureates and appealed for continued support for Tibet's bid for autonomy. 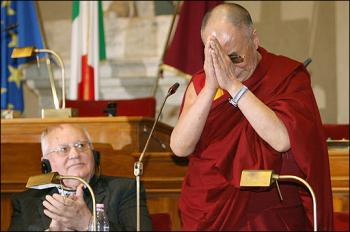 "Tibetans have a very resistant spirit, but ultimately they begin to get irritated," the exiled Tibetan Buddhist leader told regional lawmakers in northern Turin, according to the ANSA news agency.

"For this reason it is extremely important that your support continue," he said. "Ours is a just cause... (Tibetan) culture should be preserved not just for the Tibetan people but for the entire international community because it is a culture of peace, compassion and non-violence," he added.

The Dalai Lama made a similar appeal last Thursday in Rome, urging lawmakers to offer both concrete help as well as moral support.

The Tibetan Buddhist leader spoke in the parliament building but not in the assembly chamber as some lawmakers had wanted.

"We do not want independence for Tibet, but only to preserve our cultural traditions, which enrich even those of China," the Dalai Lama said.

China made clear its disapproval of the trip to the Italian foreign ministry.

Beijing has complained to the Italian foreign ministry over the visit, which took the Dalai Lama to Rome, Milan and Turin.

Recent meetings between the Dalai Lama and German Chancellor Angela Merkel and US President George W. Bush have angered Beijing.

In Milan, the Dalai Lama led a three-day conference attended by some 8,000 people.

The Dalai Lama and the pope met in October 2006, but an initially scheduled meeting during the current visit was cancelled, in a decision that Italian media reports said facilitated the recent ordination of a new bishop in Guangdong, southern China, with the Vatican's approval.

China sent troops into Tibet in 1950 and officially "liberated" it the following year. The Dalai Lama, who fled Tibet following a failed uprising in the region in 1959, now travels the world seeking support for his calls for Tibetan autonomy.