A Vesak taste for the new mayor of Brent

London, UK -- The newly elected Brent Council Mayor , Ralph Fox recently had a little bit of the taste of Sri Lankan Vesak at a real dansala in a Buddhist temple in the suburbs of London. 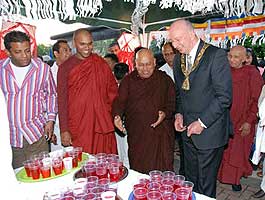 He gulped a real glass of Saruwath with real kasa kasa seeds floating in it and ate some boiled gram cooked in the Sri Lanka style with relish of pieces of coconut and was delighted by the taste. Mayor Ralph Fox of the Brent Council and ms.

Kantha Mistry were the chief guests at Sri Siddhartha International Buddhist Centre in Kingsbury at a short ceremony to light the huge Vesak lantern built at the temple and open the traditional Dan Sela – to give food to strangers and friends alike.

Brent, that encompasses Kingsbury is one of the boroughs of London. The chief incumbent of the temple Venerable Galayaye Piyadassi Nayaka Thera led monks blessed the new mayor and councillor by chanting pirith before the opening ceremony of the dansala and lighting of the Vesak lantern.

Before the blessings the Mayor also listened to a sermon by the Nepalese monk, Venerable Sumana, on the significance of Vesak.