London, UK -- “I had to come. This is the nearest thing to meeting a Buddha that’s going to happen in my lifetime,” said Morag, 45, a science teacher from Glasgow. For ten-year-old Gialbu Sherpa from Ashford, Kent, “the Dalai Lama is like a god”. 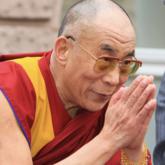 For Lobsang Chodron, 80, a frail but feisty Finnish nun ordained into the Tibetan tradition, the pilgrimage to hear him speak always holds its own magic. “We should learn from a teacher, not from a book. You can trust his spiritual integrity absolutely,” she said. Among the 28,000 people of many faiths who bought tickets to hear the Dalai Lama speak at Nottingham Arena over the May Bank Holiday, many doubtless see qualities in the Nobel laureate that have made him one of the world’s few global spiritual teachers.

Admiration for him abounds at such events. But behind the superlatives expressed by his followers is a quiet reverence for his approach to the struggle for survival. His qualities have been tested in the fire. He has been in exile for nearly 50 years and his people face what he has reluctantly called the “cultural genocide” of Tibet.

In the past two months Tibetan resistance has been met with the kind of crackdown reminiscent of the Chinese occupation that forced the Dalia Lama to flee in 1959. Some Tibetans, including monks, seek to defend themselves by force if necessary, but the Dalai Lama remains immovable in his commitment to non-violent protest.

When he speaks of cultivating the twin pillars of Buddhist life — compassion and wisdom — he is clearly a man of humanity. Tibetans believe him to be the reincarnation of the enlightened being Avalokiteshvara. For Westerners, his “policy of kindness” offers hope in a seemingly intractable conflict. Rather than meet violence with violence, he teaches forgiveness.

He moved with laughter and clarity through the audience’s questions, from inter-faith harmony to an Oprah Winfrey range of personal issues. His five days of teaching was essentially a practical guide to happiness.

The fact that so many Westerners study his Buddhist teachings seems unlikely. The Dalai Lama does not seek converts. Every day he emphasised the importance of continuing in one’s own faith. “It’s better to keep your own tradition, Catholic, Protestant — better, safer,” he said. He urged Tibetans to study and practise Buddhist teachings and praised the “great progress made by American Buddhists.

“These teachings are meaningful if they bring a more mature, more compassionate heart,” he said. The week culminated with initiation into his suggested method to achieve this: a meditation on the revered figure of Vajrasattva. Vajrasattva is one of the best-loved Bodhisattvas or enlightened beings in Buddhism, associated with health, long life and the after-death state. Crucially, Vajrasattva represents primordial purity of the mind and heart, the state, His Holiness emphasises, of our own true nature.

Paul Garden, from Great Yarmouth, Norfolk, was once a Catholic altar boy. “Catholicism taught me to project my faith outside,” he said. “But now I find it within. I feel clearer in my mind after the Vajrasattva practice, calmer in my view and with a better level of self-acceptance, so I can aspire to put others first.”

The meditation involves visualising oneself purified through the enlightened qualities of Vajrasattva. It involved three days of detailed study of Buddhist doctrines such as “emptiness” and “causality” drawn from the 14th-century Buddhist master Tsongkhapa. These teachings, exquisitely translated by Thupten Jinpa, are essential to tenderise the mind and heart so as to understand the nature of reality. For example, Tsongkhapa’s teaching of “dependent origination” reasons that all things result from a web of conditions rather than from the design of an omniscient creator god, willing the world to be as it is. Such teaching enables people to see that they are free to create more loving conditions.

With his wide-ranging command of Buddhist history, the Dalai Lama quoted the great teachers of India’s Nalanda monastery, the precursors of Tibetan Buddhism. Their investigations into the nature of the mind led them to challenge the human tendency towards the extremes of absolutism and nihilism. Tsongkhapa’s text, as interpreted by the Dalai Lama, emphasises the value of the “Middle Way”.

For several days Nottingham Arena’s audience was treated to the rigours of monastic discourse that promise a glimpse of a higher state of mind. In truth many found this intellectually challenging, and His Holiness often described his own efforts as just a step towards deeper understanding. “I am just a simple monk,” he said, with his characteristic laugh.

For Annie Cullen, a grandmother from Glastonbury, Somerset, the Dalai Lama’s presence was enough. “It means a lot because I am being initiated by the only enlightened teacher,” she said. “All he wants is more enlightenment so that we can live in peace.”