London, UK -- The Sri Lankan government of President Mahinda Rajapaksa takes pride in itself for its opportunity to participate in this celebration of conferring the title of "Mahanayaka of Great Britain" of the Malwatte Chapter of the Siyam Nikaya, the biggest order of Buddhist monks in Sri Lanka, to Venerable Bogoda Seelawimala said Rohitha Bogollagama, Foreign Minister at the London Buddhist Vihara. 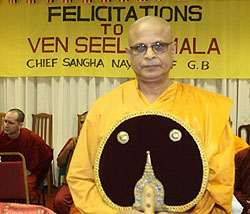 Calling the appointment of the Chief incumbent of the London Buddhist Vihara, Venerable Bogoda Seelawimala as the Chief Sangha Nayaka of Great Britain, is a further milestone in spreading the sublime dharma of the Buddha in the West, he told more than a thousand of Buddhist devotees at the meeting that "the Venerable Seelawimala is one of the most qualified and erudite Buddhist monks to be appointed as the head of the monks in the United Kingdom and as the head of the major and oldest Sri Lankan Buddhist establishment in the West started by no lesser person than Anagarika Dharmapala in 1927".

Venerable Welamitiyawe Kusaladamma , Chancellor of the Kelaniya University and Head of the Vidyalankara Privena who presided over the ceremony, Venerable Ajan Sumedho Abbot of the Amarawathi Monastery of the order of the English Sangha, Director of the interfaith network Dr. Harriet Crabtree, Rev. Kevin Morris of St. Michael’s All Angels Church and Nihal Jayasinghe, High Commissioner of Sri Lanka in London were among the distinguished gathering present at the ceremony.

Further addressing the ceremony the Foreign Minister said the Venerable Seelawimala in his exemplary contributions to the Buddhist community in the United kingdom and the leadership he has provided in maintaining inter-faith activities in London the erudite monk has reached at the helm of the Buddhist activities in the metropolis even before the appointment.

The Foreign Minister of Sri Lanka said that it is a vital foreign policy of the island nation to maintain cordial relations and extend help with the London Buddhist Vihara and the Sri Lanka government considers it is a unique occasion to be to represent itself at the ceremony of the conferring of the title of the Chief Sangha Nayaka of Great Britain to the monk.

He said Venerable Seelawimala’s high academic qualifications, and 15 years of experience as a Buddhist monk in Britain has laid a strong foundation for him to work as the Chief Sangha Nayaka of Britain to spread the word of the Buddha.

Venerable Ajan Sumedho said his relationship with the London Budddhist Vihara goes back to 30 years and it was most fitting that a monk in the caliber of Seelawimala has been appointed to the high post of Chief Sangha Nayaka.

He described him as a leader, very kind, patient and having the capability of explaining the dhamma of the Buddha in simple and lucid language to the Westerners.

He said, he was indebted to Venerable Piyadassi of Vajiragna, Venerable Henepola Gunaratana, Venerable Dr. Bellanwila Wimalaratana and the late Dr. Walpola Rahula for the great discussions he has had with them which enriched his dharma life. He said he is indebted to the late Venerable Vajiragnana, his mentor, for the great training he has had. He called all the challenges he faced as a dharma-duta monk as a river adjusting itself to the topography of the land and inevitably flowing to the sea.