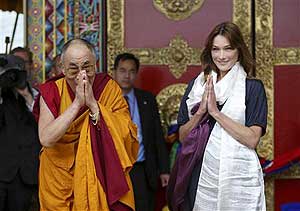 The ceremony at the Lerab Ling temple, set in remote green hills in the Herault area and built according to traditional Tibetan design, came at the end of a visit to France during which the Dalai Lama repeatedly criticized Olympics host China.

His presence in France during the Games caused a headache for President Nicolas Sarkozy, who has been widely criticized for declining to meet the exiled Tibetan leader. The tacit aim of his wife's presence on Friday was to appease the row.

"I told him he was always welcome in France," said Foreign Minister Bernard Kouchner, who attended the inauguration and met the Dalai Lama briefly with Bruni-Sarkozy afterwards.

The red and gold Lerab Ling is one of the biggest Tibetan Buddhist temples in the West. It houses a 7-metre (23-foot) high golden statue of Buddha and many holy relics and scriptures. Another golden Buddha sits in the middle of a lake just outside.

Hundreds of students of Buddhism braved heavy rain to visit the site, which was decorated with multi-colored Tibetan prayer flags. They sheltered under orange umbrellas on the grass.

The Dalai Lama led a procession of monks in orange and red, chanting and playing long trumpets, around the temple, accompanied by Bruni-Sarkozy looking glamorous in a dark blue knee-length dress. When they arrived at the door, the Dalai Lama gave her a khata, a long white scarf symbolizing welcome.

The Buddhist pageantry was a departure for former model Bruni-Sarkozy, who has recently appeared on the covers of glossy celebrity magazines promoting her latest pop album.

The Dalai Lama's two-week visit to France was mostly focused on lectures about Buddhism, but he also seized the opportunity to express fears and grievances about Chinese policies in Tibet.

His interpreter told reporters the Dalai Lama had reiterated his concern that China was intensifying repression in Tibet during the Olympics to Bruni-Sarkozy and Kouchner.

His comments are sensitive at a time when China is hosting a $43 billion Games partly aimed at impressing the rest of the world with its newfound status as a major power.

The question of Tibet came to the fore in March when Chinese forces put down protests there. Beijing came under pressure to stop the violence and engage in dialogue with the Dalai Lama.

Two series of talks between Chinese authorities and envoys from the Buddhist leader have taken place since then but he says they have yielded little progress.

Sarkozy's response to these developments drew criticism from pro-Tibet campaigners but also caused tension with Beijing.

First he said he would only go to the opening ceremony of the Games if China talked to the Dalai Lama. This irritated Beijing, but he angered the pro-Tibet camp by eventually going.

Warned by the Chinese ambassador to France that there would be "serious consequences" if he met the Dalai Lama, Sarkozy shot back that it was not for China to determine his agenda. But in the end he declined to meet the Buddhist exile.