Prague, Czech Republic -- According to a report in Monday’s edition of Právo newspaper, Prague’s Vietnamese community plans to build a Buddhist temple in the suburb of Písnice, home to many Vietnamese. 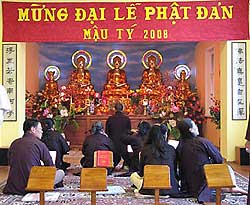 The temple would be the country’s second: the first opened earlier this year in Varnsdorf, North Bohemia.

Marcel Winter is the head of the Czech-Vietnamese Society:

“In Vietnam, around 70 percent of the population are Buddhist. But in the Czech Republic, the figure is actually much higher: It is estimated that around 90 percent of Vietnamese living here are Buddhist. Whenever one visits a Vietnamese family, the best room in the house – the one for receiving guests – always has a small shrine. It usually consists of a statue of the Buddha Shiva, who brings prosperity, and incense, which they always burn on holidays. So there’s a great hunger for Buddhism among Vietnamese in the Czech Republic, because it provides a link to their mother country.”

Because relations between Vietnamese and Czechs are more or less problem free, Marcel Winter does not expect the temple – which will be built on privately-owned land and financed by the community – to arouse much, if any hostility. That’s a marked contrast to the furore surrounding attempts to build a mosque in Brno – the small Muslim community was eventually forced to abandon plans to include a minaret. So what explains the sharply different attitudes to Buddhism and Islam – two negligible, almost invisible religions in this country - among Czechs?

“Well, over the last decade or so, Czechs have finally been able to travel to distant corners of the globe, both as tourists and on business, and a huge number of them have now been to Thailand. There they always visit Buddhist temples, and with their own eyes they see that Buddhism is a peace-loving religion, one that poses no threat to them. But as far as Islam is concerned, what they see are TV reports of suicide bombings, terrorist attacks and so on. And that generates fear, especially among people who don’t know anything about the major religions. But when there’s a religion whose calling card is a smile, a religion that promotes hard work and a willingness to help others, I think that’s the main reason Buddhism doesn’t bother anyone in the Czech Republic, and in some cases is actively welcomed.”

According to media reports the temple – which will be located a few minutes’ drive from the sprawling SAPA market known as ‘Little Vietnam’ – will be completed within three years.