The Dalai Lama: Think about the good of others. Think about Ukraine as a whole.

KIEV, Ukraine -- In December 2008 a group of Ukrainian and Rus­sian journalists went to the north of India where the small town of Dharamshala is located. Over the past fifty years it has be­co­me a major attraction for Bud­­dhists, as well as scholars, poli­ticians, and journalists from all over the world. 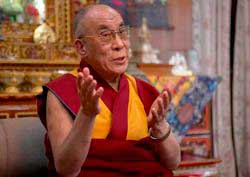 The pla­ce is the residence of Jet­sun Jam­phel Ngawang Lob­sang Yeshe Ten­zin Gyatso, the 14th Dalai Lama, one of the most distinguished religious le­aders of our times. He is a living deity for Buddhists and the number one enemy for the Com­munist Party of China. The man refers to himself as “an ordinary Bud­dhist monk.” Af­ter the press conference the Dalai Lama admitted that he had en­joyed communicating with the journalists beca­use thro­ughout the conference only human values and global problems were discussed, not politics.

The beginning of the 21st century has shocked huma­n­kind with its events. Incre­asingly of­ten we hear about terrorism, lo­cal conflicts in various parts of the world, and the world econo­mic crisis. How do you think we should preserve our inner strength without losing the op­portunity to be happy? What is your philosophy of happiness?

“In certain periods in our life we may experience good fortune, but there is no guarantee that it will always be so. Mo­ments of hap­piness are always followed by more complicated periods. There is always this sequence, such is life.

“Similar ups and downs were observed in the 18th, 19th, and 20th centuries. The world is in­habited by the same living beings in the 21st century, so there will be these ups and downs. If we be­come euphoric over some success and allow ourselves to think that this will last forever, we will ma­ke a mistake. On the other hand, it is also a mistake to lose hope and become pessimistic when experiencing a difficult period.

“Terrorism is, of course, big news for our times, but it is perpe­trated by a handful of people. Yet there is always a handful of people who behave inappropria­te­ly. It’s just that today, with the development of modern techno­logies, people like this find it con­siderably easier to act that way. In fact, such people existed three or four hundred years ago. Even at the time of Buddha there were people in India who behaved inappropriately. There were people of this kind also among Bud­dhists. Quite a few such people existed at the time of Jesus Christ and He suffered at their hands.

“However, if you look at the whole picture, people’s aspirati­ons for peace are considerably stronger. When Americans atta­cked Iraq, millions of people from Australia to the United Sta­tes actively protested against the hostilities. The war of Kosovo is another example. Remember how many people campaigned against it. The recent military conflict between Russia and Georgia also drew serious criticism. This is a very obvious sign that people do not want any more violence, regardless of its cause. I think it is a sign that the situation in the world is getting healthier.”

“INCLINATION TOWARD TRUTH, JUSTICE, AND CHARITY RUNS IN OUR BLOOD”

Talking of trust, we people build our relations primarily on trust. What should be done to enhance such confidence among people?

“Honesty and truthfulness are the basis of trust. Here you find a direct connection with charity. Charity means that you care for your fellow humans. If this care is sincere, it leaves no room for falsehood, oppression, or any attempts at deceit. If you cheat and oppress fellow huma­ns, it means that you neglect their well-being and rights; that you care only about yourself while exploiting others.

“This is where my major concern lies. We have a collective way of life. It doesn’t matter what degree of strength and power an individual has achieved because this individual’s future and happiness depend to a considerable ex­tent on another community of people. The rest of humankind is the basis of that individual’s well-being and future. When we cheat and oppress others, we thus un­der­mine the basis of our own fu­ture. This means that we are not using our intellectual capacity in full measure. All we can see is our self-admiring ego. We look at the world through a very narrow window. We do not consider the conse­quences on a broad scale. Such is my view. Honesty, openness, and transparency — such is the foundation of trust.”

Your Holiness, it seems that religion is getting increasingly less important in the modern world, and that fewer and fewer people protect other people’s rights, oppose violence, or care for the environment. Perhaps in our times some humanistic, altruistic movement can change this world for the better, rather than religion?

“A very good question. On the whole, as I said before, charity and care for others’ well-being are the key factor. If we take this as the foundation, politics becomes constructive, while business — more reliable. Look at the big-time American businessmen. Many of them are liars. One of the reasons behind the great damage America recently sustained is that some of these businessmen and bankers resorted to falsehood and deceit. In the end this led to a collapse.

“Therefore, charity and honesty are the key factors. The question is how to go about developing charity in this world. I usually say that there are several ways. The first one is to develop empathy with the aid of theistic religions. The second one is an approach offered by non-theistic religions, using the cause-and-effect law whereby you benefit from doing good things and suffer from doing bad things. Such is the cause-and-effect law. Both these methods have to do with religious traditions. Yet there must be a third method; there are so many people who are essentially nonbelievers. There must be a secular way to advance these values.

“These values per se belong to the secular sphere and nonreli­gious ethics. I usually refer to them as universal human values. Without doubt, all religions also have to do with universal human values, yet the latter have actually nothing to do with religion. They belong to secular ethics, so it is necessary to promote them with the aid of secular rather than religious methods — in other words, by applying common sen­se and relying on emotions com­mon to and uniting all people.

“If we start speaking with each other in this audience, putting warmth and charity in our words, everybody will be happy. Inclination toward truth, justi­ce, and charity runs in our blood. There is yet another important aspect. The latest scholarly findings indicate that charity and empathy help strengthen our immune system whereas anger and hatred destroy this system. Accepting this as a basis, tell people that you and others benefit from charity and empathy.

“I often visit various countries and places. Wherever I go, I always stress the importance of the­se values. I am not talking abo­ut religion. I am a Buddhist, but I have never undertaken to spread Buddhism. Never. I have always tried to share with people what I know about universal human values; I apply secular methods. Hu­man rights and environment protection — all this is closely connected with charity, a sense of responsibility, and awareness of common interests.”
“THINK ABOUT THE GOOD OF OTHERS”

The current situation in Uk­raine is such that the main political forces cannot divide power among themselves, with each trying to get it all, refusing to make concessions. As a result, this co­untry is sinking ever deeper into the political crisis. How do you think we can overcome this impasse?

“More often than not people who use the struggle for power as a method are shortsighted. It is necessary to bear in mind the in­terests of the state, not one’s own. Here you also find the absence of a sense of responsibility and care for others’ well-being. People of this kind are only concerned about [saving] their name, about their families and their power.

“Let me tell you a story. Once I met with a group of scholars in America. One of them made a pre­­sentation, showing his re­se­arch’s findings. He said that people who often use words like ‘I,’ ‘my,’ and ‘for me’ are more susceptible to cardiac diseases and heart attacks. Why? Because if one keeps thinking of himself and keeps saying ‘I’ time and aga­in, one’s worldview becomes very narrow. Given this narrow worldview, even a small problem appears to be a very big and intolerable one. Then you become even more concerned, you are un­der stress, you feel lonely, de­pre­ssed, and then you have a heart attack.

“Think about the good of others. Think about Ukraine as a whole. Remember your past and look into the future. Then your own problems will seem very small and there will have a lower risk of suffering a heart attack.”

THE INSTITUTION OF THE DALAI LAMA MAY CEASE TO EXIST

Since 1999 you have been sa­ying that your current reincar­na­tion may be the final one. Re­ce­n­tly the press published your pro­phetic message that this re­in­car­nation may be the last one. Does this mean that you will tran­sfer to an entirely new level of existencen or that your mission as Dalai Lama will be accomplished?

“From the standpoint of Ti­be­tan Buddhism, the Dalai Lama in­stitution does not have a crucial mea­ning. It has existed for ap­p­roximately 500 years, while Tibe­tan Buddhism has been aro­und for over 1,000 years. The sa­me ap­pli­es to the Tibetan nation. Archa­e­ological excavations show that the Tibetan nation is 8,000–9,000 ye­ars old; some researchers mention 30,000 years. As I said, the institution of the Dalai Lama is only 500 years old.

“This institution emerged under certain conditions and it my cease to exist in certain circumstances. Back in 1969, in an official statement, I clearly emphasized that it is the Tibetan people that must determine whether the Dalai Lama will continue to exist.

“Therefore, I always say that if the majority of Tibetans decide that they no longer need the ins­titution of the Dalai Lama, it will cease to exist. In that case I will be the last Dalai Lama. But this does not mean that my life will be the last one. I will continue to reincarnate. Naturally, I do not possess any special abilities that would allow me to control my future. I have no such abilities, but I have determination. My favorite pray­er reads as follows:

“This is my favorite prayer. I always offer it up and it becomes the source of my strength and in­ner resolve. This entire universe may disappear, but it will be re­placed by a new one, and I shall be there.

“From the Buddhist point of view, all of us face reincarnations. There will appear a new universe, without Russia or Tibet, but with new place names and new nations. Perhaps the living beings will acquire a new form, yet they will remain the same living beings, with the same emotions. Their consciousness will be a continuation of our current consciousness. As before, they will have an inherent striving for happiness and a desire to avoid sufferings.”
TOP