Unexpected stupa: The Benalmádena Enlightenment Stupa rises 108 feet high and stretches 82 feet across at the base – the largest in the West.

Benalmádena, Spain -- Dressed in dark jeans and jacket, Dizi Btissam fingers a motorcycle helmet as she listens to a young man with thick eyelashes and wavy hair. Behind them, a gilded statue of Buddha looks benignly down at a row of poinsettias. 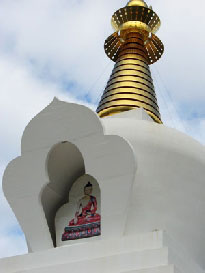 << Benalmádena’s Enlightenment Stupa is a karmic surprise amid the Moorish minarets and ancient Christian steeples.

“He is not a god,” Ivan Baez explains, as a low tremolo of chants filters through the sound system. “For us he represents the natural qualities that we all possess but that are obscured by our emotions, personalities…”

He is interrupted by the jingle of a cellphone from Ms. Btissam’s pocket. She dashes outside to answer. Mr. Baez smiles. He wears a collarless cotton shirt dyed the deep red of uncooked saffron, and he gives the impression that life is equally good whether or not Btissam returns. She does come back, though, minutes later, to listen without further interruption as Baez speaks about enlightenment, about “resting fully in what is” and experiencing “our highest potential.”

Buddhism is not what I expected to learn about in Spain. As I drove along the coast south of Malaga, my mind filled with the sound of lapping waves and the imagined clack of castanets. I pictured the rhythmic arches of Cordoba’s mosque and the intricate floral carvings of the Alhambra. The last thing I expected to see, rising above the guardrail, was the gold spire of a stupa, a moundlike monument that commemorates Buddha. And it was huge, soaring 108 feet high and stretching 82 feet across at the base – the largest stupa in the West.

Granted, this is Andalucia, a region known for its history of religious diversity. In many towns, the church bell tower encases an older minaret. In Cordoba and Toledo, 14th-century synagogues feature intricate Moorish carvings. And ensconced among Cordoba’s grand 10th-century mosque is a Roman Catholic cathedral. These are the legacies of La Convivencia, the time between 711 and 1492 when Muslims, Christians, and Jews lived peaceably together in lively intellectual and artistic exchange.

But a Buddhist stupa? What is it doing here?

Stupas began as funerary mounds containing relics of Buddha, and they have evolved into highly symbolic monuments that commemorate events in the life of Buddha and enshrine holy objects and prayers. They vary geographically, and the Benalmádena stupa, which commemorates Buddha’s enlightenment, conforms to the Tibetan style: an irregular dome that flares at the top and narrows at the base, resting on a square, tiered platform.

Usually these monuments appear where there is a thriving Buddhist community, and this is where the Benalmádena stupa breaks with both Buddhist and Andalucian traditions. When Toledo’s synagogue was built, the city’s Jews were wealthy and politically influential. Similarly, Spain’s great mosques and cathedrals were built by the rich and well-connected members of their respective religious communities. But Spain’s Buddhists, though increasing in number, don’t coalesce into a socially or politically relevant community. As elsewhere outside Asia, most Buddhists here are converts who gravitate to one of many Buddhist traditions, including newer variations combining Buddhist practice with Christian beliefs.

This isn’t to say that the Benalmádena stupa is devoid of political overtones. “The target may be other Buddhist groups,” suggests Martin Baumann, a professor of religion at Lucerne University (Switzerland) who researches the political impact of religious buildings. Many Tibetan Buddhists believe that their tradition is the purest. “In this way,” Dr. Baumann adds, “the Dalai Lama and other lamas are seen as being the carriers of unpolluted spirituality.” Built in strict accordance with traditional prescriptions and rituals, the stupa thus gives Tibetan Buddhism high visibility in the West’s Buddhist landscape.

The stupa also plays into an internal dispute within one of the four principal schools of Tibetan Buddhism, the Karma Kagyu. The Dalai Lama is the most prominent international spokesman for Tibetan Buddhism and for the Tibetan diaspora. This shines the spotlight on the school he heads, the Gelugpa school. Some speculate, however, that upon his death, focus could shift to the Karma Kagyu school and its head, known by the title of “Karmapa,” as the rallying point for Tibetans in exile.

That makes the question of who actually is the legitimate Karmapa more important. And it’s an unresolved question. The group behind the Benalmádena stupa supports Trinley Thaye Dorje as Karma Kagyu’s 17th Karmapa. Others in Spain and elsewhere support Ugyen Trinley Dorje, whose escape from his Chinese guards in 2000 made headlines around the world. Both men have been recognized by different authorities as the reincarnation of the previous Karmapa, who died in 1981.

So much for the effects of the stupa. What about its origin? “There is always a story,” smiles Margarita Lehnert, who for many years, worked as assistant and translator for the late Lopon Tsechu Rinpoche, a Tibetan Buddhist teacher who, in 1994, built a 42-foot stupa at a Buddhist retreat northeast of Benalmádena. About three years later, he and Ms. Lehnert drove to the coast for lunch. The monk’s robe caught the eye of a portly man who introduced himself as Enrique Bolin, Benalmádena’s mayor.

Mr. Bolin subsequently traveled to Nepal, where, Lehnert says, “he got so impressed and found it so inspiring, that he said he wanted a stupa for his town as well.”

“There are thousands of towns Lopon Teschu Rinpoche visited in the West,” Lehnert adds, “and this was the first mayor who wanted to build a stupa. So there must be what we call a very strong karmic connection.”

Bolin, who stepped down as mayor in 2007, gave about $300,000 of public funds as well as the land, while Lehnert founded the Karma Kagyu Cultural Association, which raised about $1 million for the project. Construction began in 2001 and, before the stupa’s inauguration in October 2003, lamas “activated” it with special offerings and rituals. Lehnert explains, “because the stupa is a living monument, it’s all the time sending, let’s say, positive energy.” In this sense, it functions somewhat like a Tibetan prayer wheel that spins prayers into the universe.

When the stupa was inaugurated, Bolin expressed the hope that the monument would be an added tourist attraction. But the stupa has proved pale competition for the town’s sunny beaches and charming, whitewashed streets. This could change, though. Btissam, the young woman with the cellphone, is studying tourism at the University of Malaga, and she was gathering information for one of her classes.

And while the stupa may not physically fit in with Andalucia’s Moorish and Mudéjar architecture, the life surrounding it embodies the Convivencia spirit of interfaith exchange.

A short drive down the hill, Lehnert perches with perfect posture in her living room. Behind her, windows overlook the Mediterranean as she visits with Mipham Rinpoche, a high lama in the Nyingma school of Tibetan Buddhism, and his wife, Mayum. The Polish-born Lehnert moves seamlessly from Tibetan to English as she explains facets of Tibetan Buddhism to a couple of unexpected American visitors.