The modern monks of Buryatia

Buryatia, Russia -- In the Republic of Buryatia in Siberia, religions and cultures flow together, making a rich mix. It is in Buryatia that the heart of Russian Buddhism beats. 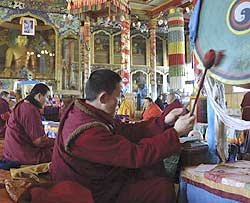 Buryat Buddhists have cherished most rituals which came here from Tibet more than four hundred years ago.

But if you imagine Lamas living in Siberian wilderness as outcasts there is a surprise for you. Despite cherishing traditions, the monks here go hand-in-hand with modern tendencies. Some of them even stay football fans.

“It’s my favourite team Russian, CSKA, playing for the UEFA cup. You know I used to be a good player myself when I was younger,” Lama Zhalsan, a Buddhist monk exclaims while watching a game.

Zhalsan did not give up his favourite game even when he became a monk. But he has given certain vows. However, his approach seems to be light-hearted:

“I won’t get married, I don’t drink vodka, I don’t smoke, what else?” he says with a smile.

Buddhists worship Itigelov as the perfect lama who reached the supreme level of practicing Buddhism.

It’s thought more than eighty years ago he plunged into deep meditation and asked to be buried, and when he was exhumed some seven years ago his body was almost intact.

Itigelov is now kept at the main Buddhist monastery in Russia, the Ivolginsky datsan.

“Many can feel how he breathes. No scientist has yet proven that he’s dead,” Lama Zhalsan points out.

Itegilov is certainly a good example for monks, but as Tarba Dorzhiev says every Buddhist is free to choose his own way. A monk himself, he’s married, he has four children, a house and a car.

“Datsan is not so much a monastery, it’s more of a university for Buddhists. Because Buddhism is not a religion, nothing like Christianity or Islam. Monks are here to study,” Tarba Dorzhiev explains.

Buddhism, being so tolerant, is drawing more and more young people to datsans. The first Buddhist monastery for women opened some nine years ago opened here, in Buryatia.

The women from the monastery conduct almost all traditional Buddhist rituals, but in fact they lead a normal life. All of them are married. They have children, but they say that doesn’t stop them from profoundly believing in Buddha’s teaching.

“You know it’s very difficult to keep the balance between normal life and faith. I think it’s even a more difficult spiritual task than just segregating oneself,” says Zorima Budaeva, one of the female Buddhist monks.

Even though Russian Buddhists’ spiritual leader is glad more people are studying Buddha’s teaching, he doesn’t seem to endorse women’s zest for it.

“Women can sincerely believe in something, but they can rarely understand it. Buddhism needs understanding much more than blind faith,” Khambo Lama Azyusheev, the Head of Buddhist Sangkha of Russia notes.

And to that Buryatia’s women Lamas gave a simple response: Buddhist philosophy is so deep that these days even men have difficulties perceiving it…