His Holiness holds a day of teachings, meets with Danish media and parliamentarians

Copenhagen, Denmark -- His Holiness the Dalai Lama at the outset of giving teachings based on Nagarjuna's Commentary on Bodhicitta (Jangchum Semdrel) and Kalalashila's The Middle Stages of Meditation (Gomrim Barpa), told the audience of 3,600 people who had come to hear his teachings that he does not believe in conversion and therefore never tries to convert anyone to the Buddhist faith. 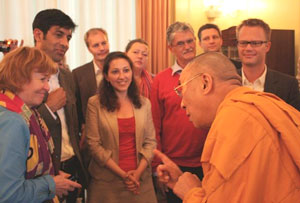 << His Holiness making a parting remark to some Parliamentarians including former Foreign Minister Mr Lykketoft before departing for the Bella Centre. Photo byDina Knudsen

He said Westerners traditionally belong to the Christian faith and this is why they should stick to their traditional faith.  He, however, said that if an individual on a voluntary basis finds something beneficial in practicing the Buddhist faith then that is fine.

The Tibetan spiritual and temporal leader said that in the past people could afford to live in isolation, as in the case of Tibetan people in Tibet, and not bother to have any links with people from the outside world or other faiths.  But since the world has changed and various countries and the people have become more inter-dependent, the need to show respect and appreciation for different faiths is important, he said, adding that it is possible that among the audience there could be some who practice other traditions such as Hinduism, Islam and Christianity.

The teaching took place at the prestigious Bella Convention Centre and was attended by people from different parts of Denmark and Europe. Some Tibetans from Denmark and other parts of Europe as well as a few Chinese could also be seen in the auditorium. The teachings will conclude tomorrow morning. In the afternoon His Holiness will give a public talk on “Peace Through Inner Peace” to a capacity crowd of 4500.

Earlier in the morning, His Holiness met with around 80 members of the press at the hotel and answered a series of questions ranging from the issue of Tibet to how to increase happiness. In response to a question from a journalist about the status of Sino-Tibetan dialogue, His Holiness said that we have to admit that despite our best efforts there has been no progress and that the Chinese government has rejected our “Memorandum on Genuine Autonomy for the Tibetan People”. His Holiness said that our faith in the Chinese people still remained and that we are making every effort to reach out to the Chinese people, who it has been seen that through better information and awareness show sympathy and support the just cause of the Tibetan people.

In response to another question, His Holiness said that the reason why he was meeting with political leaders and parliamentarians in Denmark was because they have shown an interest to meet with him and that he was accordingly responding as he has a responsibility to the Tibetan people because of their faith and trust in him.

Before returning to the Bella Centre for the afternoon session of the teachings, His Holiness met at the hotel with around twenty parliamentarians representing all the political parties in Danish Parliament including the former Foreign Minister Mr Mogens Lykketoft.

The Representative of His Holiness the Dalai Lama based at the London Office of Tibet, Mr. Tsering Tashi who is accompanying the Tibetan leader said that the Danish public’s response to His Holinesss’ visit was positive and amazing.

“Each time His Holiness would leave the hotel to the teaching venue or return back to the hotel, the people lined up on either side of the hotel entrance and road to greet His Holiness. The atmosphere all around becomes festive and peaceful and one could see smiles on everyone’s face.  People would also wave at His Holiness as his motorcade passed them by,” said Mr. Tashi.

Tomorrow morning, His Holiness is scheduled to grant a group audience for Tibetans, Tibet related NGOs and a group of Chinese democracy advocates.