The gala-concert Ocean of compassion took place in Moscow

Tuva, Russia -- The unique ethno-rock-festival “Ocean of Compassion” which started in Kalmykia, culminated in a gala concert in the Great Hal of the Moscow International House of Music on June 2. 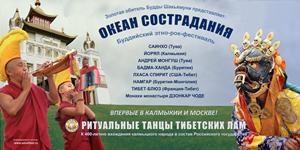 The festival was dedicated to the occasion of the 400th anniversary of voluntary entrance of the Kalmyk nation into the system of Russian state, and to the Year of Youth. The concert was officially opened by the Head of Republic Kalmykia, Kirsan Ilyumzhinov.

“Ocean of Compassion” was a massive ethno-rock-festival, in which participated the most prominent performers of ethnic music of the countries and regions of Tibetan Buddhism spread – Kalmykia, Buryatia, Tuva, Mongolia, and Tibet.

The goal of the organizers of the unique festival was to introduce to the audience music based on Buddhist ideals of compassion and good will, which are close and comprehensible to representatives of all religions.

The emblem of the festival is a Buddhist white conch shell, which represents the boundless ocean; it is also one of the Buddhist eight auspicious symbols, and also it produces beautiful sounds.

His Holiness Dalai-Lama XIV directed an address to the participants of the festival. “I believe that if even a small handful of people, who have achieved internal state of peace and calm, will start to show good will and responsibility in their interactions with others, it will have a beneficent effect on the whole society”, it said.

Tibetan lamas from the Dzonkar Chode” monastery, who are experts in the art of ritual dance, where every movement and gesture is an offering to the enlightened beings – the Buddhas, introduced for the first time outside the walls of the monasteries of Tibet and Mongolia fragments of the Tsam mystery. Tibetan vocalist Loten Namling, whose name means “White Crane”, performed with experimental project “Tibet Blues”, in co-operation with French jazz musician. A delicate mixture of multi-instrumental jazz and traditional vocal technique of Loten Namling translated ancient Tibetan songs into contemporary reality. This project is an invitation to give new meaning to everything that we know of the Buddhist culture of Tibet.

From Russian performers, there was the Buryat singer Badma Khanda and group “Namgar” from Buryatia, orchestra “Yoryal” from Kalmykia, and other musicians who dedicated their lives to preservation opf the energy of good will and compassion, which permeated the songs of their ancestors. Tuva was represented by:

- the singer Sainkho, who has been called “the magic voice of Tuva”. Her vocal technique is without precedents – from Tuvan throat-singing style “khoomei”, to dizzying lowest and highest regions of of jazz vocals.

- Boris Grebeshnikov and the group Akvarium’s participation in the festival “Ocean of Compassion” in Kalmykia could hardly be called accidental. BG’s interest in Tibetan Buddhism gave the impetus for the first step to a deeper understanding of the Eastern culture to many people. His far from shallow interest in Eastern, including Tibetan, cultures, puts him on the same level with such sensitive and devoted followers of Buddhism as Robert Thurman and Richard Gere.

At the end of the concert, Shadzhin-Lama of Kalmykia, Telo Tulku Rimpoche presented khadaks to all the artists: “Music makes us feel the entire spectrum of human emotions – love and suffering, anger and joy…In sum, the musicians strive to tell people about their own deepest feelings. And when you add the intention to help others overcome suffering and difficulties of life, as well as a generous wish to share the beauty of the music and the words with the world, creativity becomes a beneficent deed. And that is Buddhist Dharma in action.”