Frankfurt, Germany -- The Dalai Lama arrived in Frankfurt in Germany from Warsaw, Poland on Wednesday evening. The visit to Germany is at the invitation of three organisations based in Germany, Tibethaus Deutschland e.V., Deutsche Buddhistische Union e.V. and Pagoda Phat Hue, a Vietnamese Buddhist community. 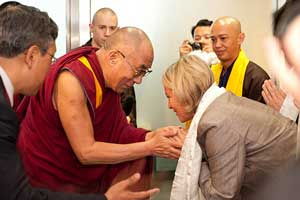 His Holiness the Dalai Lama was received at the hotel by the Hessen State Chief Minister, Mr. Roland Koch and the members of the Tibetan and Vietnamese communities welcomed His Holiness.

His Holiness and Mr. Koch jointly addressed the members of the media after their meeting. There were over 130 journalist, photographers and cameramen.

Tomorrow morning His Holiness will lecture on the Buddhist text “The Middle Stages of Meditation” by the great Indian Master Kamalashila at the Commerzbank Arena Stadium in  Frankfurt.