Buddhism is fastest-growing religion in English jails over past decade

London, UK -- Although adherents to the Eastern faith believe in peace and the sanctity of life, almost all of the Buddhists behind bars in this country are serving lengthy sentences for serious crimes such as violence and sex offences. 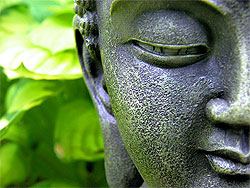 Some jails and secure hospitals including Broadmoor have opened shrines known as Buddha Groves in their grounds, and there is a nationwide network of chaplains to cater for the growing population.

It is claimed that most of the Buddhists in jail converted after their conviction, and chose it over other religions because its emphasis on meditation helps them cope with being locked up.

Supporters of Buddhist criminals say they also believe the spiritual development they gain in prison will help them once they are released, and prevent them from re-offending.

Lord Avebury, a Liberal Democrat peer who is the patron of Angulimala, the Buddhist Prison Chaplaincy Organisation, told The Daily Telegraph: "The numbers are quite remarkable. I think one of the reasons is that they convert to Buddhism in prison – it's a reasonable hypothesis that they become interested when inside.

"I think it does enable people to come to terms with their situation. Buddhism gets people away from the idea of material ambitions, and if people are in prison they can't go for those goals anyway.

"You do have more time to reflect and meditate in jail, and get away from the idea of self."

He went on: "My inclination would be to say it must help people after they leave jail. The whole idea of Buddhism is not to cause harm to anybody, and the person who persists in their faith is likely to be totally recast in their life and must be less likely to re-offend."

Lord Avebury said the care offered by the network of Buddhist prison chaplains, who are supported by the Prison Service, would also have encouraged many prisoners to convert, in addition to the existence of shrines in the jail grounds.

"We have an annual celebration at Spring Hill [an open prison in Buckinghamshire where the first Buddha Grove was built]. That's a remarkable place, it's extremely peaceful. Staff go there to meditate as well as prisoners."

Official figures show Britain's 149,157 Buddhists – who believe in gaining spiritual knowledge about the true nature of life and do not worship gods – make up just 0.26 of the general population .

Detailed statistics published by the Ministry of Justice show that almost all were serving long sentences. In total, 621 were serving terms of four years or more, while a further 521 had been given indeterminate sentences.

The rate of growth in the Buddhist jail population outstrips that of Muslims, whose numbers have more than doubled from 3,681 to 9,795 over the past 11 years.

Christians remain the best represented group behind bars, with 41,839 worshippers, while those declaring themselves to have no religion, or atheist or agnostic views, now stand at 27,710.

Atheists make up 1 per cent of the prison population for the first time this year, with 570 declared adherents to the view that there is definitely no God.

Just 220 prisoners said they were Jewish – fewer than the 366 recorded Pagans, 340 Rastafarians and 230 Jehovah's Witnesses. There are also 37 members of the Salvation Army in jail.

A Prison Service spokesman said: "The Prison Service recognises the positive role faith can play in the lives and rehabilitation of prisoners, and is committed to enabling prisoners of all faiths to practise their religion.

"Each prison has a multi-faith chaplaincy team to meet the religious and pastoral needs of prisoners and staff. Teams include chaplains and volunteers from a wide range of religions and denominations."

Population in English and Welsh prisons by religion in June 2008