London, UK -- A sapling of sacred Ananda Bodhi of Jethawanaramaya, Sravasthi, India was offered recently to the Red Bridge Buddhist Vihara in Ilford, Essex by Dr M.B. Ranatunga and Mrs. Nawamalie (Nali) Ranatunga. Red Bridge Vihara conducted the religious services for many years without a Bodhi (Bo- Ficus religiosa) tree since the Temple was established. 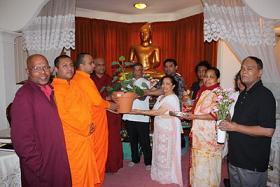 Ven Pethigamuwe Hemaratana Thero, the Head of the Vihara gladly accepted the Bodhi tree and stated that from now onwards, devotees can practice Bodhi puja and other religious activities and that this Bodhi tree would add another important Buddhist symbol to the temple.

The cutting from the Ananda Bodhi tree was propagated by horticulturist Upali Dias in Manchester and grown under special protection and suitable weather conditions in Proc Port Gardening Centre, a Horticulture laboratory in the UK. Then it was handed over to Mrs Nawamalie Ranatunga. She protected and looked after the Bodhi tree carefully, chanting Pirith daily for many months.

On the day of the donation of the sacred sapling, Ven Dhammaratana and Maha Sanga and many other devotees as well as members of the Dayaka Sabawa of the Red Bridge Buddhist Vihara also participated at the pinkama.

Buddhist tradition recounts that while the Buddha was yet alive -in order that people might make their offerings in the name of the Buddha when he was away - he sanctioned the planting of a seed from the Bodhi tree in Buddha Gaya in front of the gateway of Jethavanaramaya Monastery near Sravasthi. For this purpose, Moggallana Thero took a fruit from the tree as it dropped from its stalk, before it reached the ground.

It was planted in a golden jar with great pomp and ceremony by one of the great devotees in the Buddhist history, Anathapindika.

A sapling immediately sprouted forth, fifty cubits high, and in order to consecrate it, the Buddha spent one night under it, rapt in meditation. Since then this tree was planted under the direction of Ananda Thero, came to be known as the Ananda Bodhi.

Apart from sacred Fig tree located in Buddha Gaya in Bihar, India and Jaya Sri Maha Bodhi in Anuradhapura, the other main holy Bodhi tree which has significance in Buddhist history is Ananda Bodhi tree in Sravasthi.

Ananda Bodhi is a frequent destination for Buddhist pilgrims and visitors around the world.

Devotees of Red Bridge Temple were delighted to acquire a sapling from the holy Ananda Bodhi, for their place of worship in Ilford.

There is another sapling available and Dr.MB. Ranatunga & Mrs Nawamalie Ranatunga would like to offer to a suitable Buddhist Temple in the future.