Becoming a Buddhist in Guernsey

Guernsey, UK -- Guernseyman Richard Moorman became a Buddhist in 1997 but said he had been "flirting with the idea" since 1971. 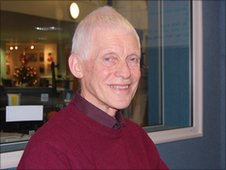 << Richard explained that Buddhists have respect for other religious practices

He explained that in that time he had researched the faith and had been practising elements of it before his official conversion.

He said the Guernsey Buddhist Group held meetings open to anyone from any branch of Buddhism or any faith.

Richard said: "We've had Zen and Tibetan Buddhists and people of other religions come to our meetings."

He explained: "They enjoy the chanting, the meditating and the things we do."

Even though meditation is a central part of Buddhist practice Richard said it had its origins in the pre-Buddhist religions of northern India and today was practised by many people both as a religious activity and in secular life.

He said: "Meditation has been shown to lower blood pressure and reduce stress levels - it's a very good thing to do irrespective of the religious association...it sharpens powers of concentration."

Richard decided to make the step of taking on Buddhism in an official capacity following his step-daughter's move to the faith and, along with his wife, began practising a Japanese derivation of the religion.

He explained when they converted to Buddhism they took part in "taking refuge" which involves accepting "the Buddha as your teacher, the Dharma as his teaching and the Sangha as the community of Buddhists".

Richard said Buddhists have "a profound respect for all sincere religious practice".

Using the example of Christmas he said they respected Christians and their celebration of Jesus' birth.

Richard said as he lives in a Christian culture he still celebrated the event: "It's not a religious festival for me but its certainly a time to enjoy being with family."

He said the main teaching of Buddhism is: "We don't exist in isolation to everything else, we are one with everything and everything is one with us... once that becomes a profound insight, it produces great happiness."