Bamiyan awaits the return of the giant Buddhas

BAMIYAN, Afghanistan -- Like all Shiites, Afghanistan's Hazara minority are waiting for the reappearance of the Mahdi, but those in the Bamiyan valley are also hoping for the return of the ancient giant Buddhas torn down in 2001 by the Taliban government in a fit of iconoclastic rage. 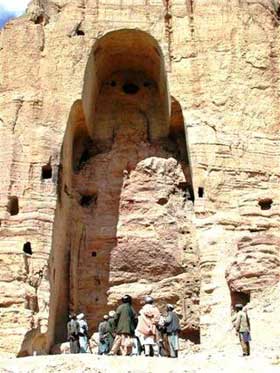 << ICONOCLASTS: Afghan soldiers from the ruling Taliban stand in front of one of the destroyed Buddha statues in Bamiyan March, 2001. The Taliban needed a full 20 days to destroy the world’s two largest Buddhas using enormous amounts of explosives. (REUTERS)

At the foot of a cliff where the niches once inhabited by the statues are testimony to their once-towering grandeur, international teams gathered by the United Nations to repair the Buddhist relics are preparing to break camp for winter.

Where the larger Buddha once stood at 55 meters (182 feet), workers under German supervision collect fragments, while an Italian team is at the site not far away of the 38-metre Buddha considered to have a more feminine face.

Between these two teams, Japanese experts are working on preserving what is left of murals adorning the walls of a network of caves.

Italian mountaineers are suspended from ropes slung over the smaller Buddha as they plug faults in the rock, embed steel anchors and install movement sensors. "Bombs have created many fissures and it's very dangerous because it's very unstable," explains Italian engineer Gedeone Tonoli.

The task was begun two years ago and is due to be completed before the year's work wraps up on November 15, he said. "After that temperatures fall below zero and we have problems with the machines."

Because of the size and density of the statues, their destroyers deployed an enormous amount of explosives, some of which failed to detonate at the time and now present a daily hazard - along with landmines left over from decades of war - for the repair teams. "Unfortunately we discover a lot of unexploded devices," says German architect Georgios Toubekis from the International Council on Monuments and Sites.

"Just recently we had two bombs of 250 kilograms (550 pounds). One of them had to be exploded behind this field - it took one week to pull it out carefully because it was heavily damaged. The other one luckily was more easy to take away."

Because of this danger, no heavy machinery is allowed inside the larger niche and everything is done by hand, Toubekis says. "The progress was very slow this year because of all these bomb findings," he says, describing the work as still in an emergency phase.

In front of the caves, Japanese specialists take down their scaffolding and seal the caves to protect the paintings, 80 percent of which were destroyed during the war, from animals that may stray inside. "We can't stay in the caves - it's very freezing, very cold," says Yoko Taniguchi.

Bamiyan, some 200 kilometers (124 miles) northwest of Kabul, stands in a deep green and lush valley stretching through central Afghanistan, on the former Silk Road that once linked China with Central Asia and beyond. It was a center of Buddhist scholarship and worship between the second and ninth centuries, before the coming of Islam.

In February 2001 Mullah Omar, head of the extremist Islamic Taliban government then ruling Afghanistan, ordered the destruction of the Buddhas as idolatrous symbols despite the fact that Afghanistan was no longer home to Buddhists.

The order for the destruction of the massive sandstone structures - until then the largest standing Buddhist statues in the world - led to an international outcry, but in vain.

Now, the people of Bamiyan are firm in their belief that the Buddhas must be restored to raise the status of the valley and attract tourists - and income. "If it is not possible for both of them, at least one of them can be rebuilt," says provincial governor Habiba Surobi.

An official with the main Hazara party, Hezb-e-Wahdat, says one should be rebuilt and the other left as it is. This would "show the world how ignorance can affect a country", says Feda.

Ali Irfani, head of Bamiyan's radio station, says people want the monuments to be reconstructed because of their cultural and historical value. "It is a good source of revenue for the Afghan government and in particular the residents of Bamiyan," he said.

But the international experts say the local people would be naive to expect the relics to ever be returned to their original state. "Everybody is asking when the Buddhas will be reconstructed," Toubekis says, but adds: "At this moment there is no decision ... going towards this direction."

The main reason, he says, is that the statues are "much more fragmented than everybody thought." "Nobody at the moment is behind putting it together like a puzzle because I think it is not possible," he says.

There is however the possibility of employing the archeological process of anastylosis, by which ruined monuments are reassembled from old fragments and, when necessary, new materials.

But Toubekis believes that if the Bamiyan Buddhas were rebuilt in this manner they could lose their world heritage status and their value as tourism draw cards could be diminished.