KABUL, Afghanistan -- The United Nations on Saturday was investigating reports that a controlled explosion of old ordnance has caused more damage to one of the famed Bamiyan Buddha statues that were destroyed by the Taliban seven year ago. 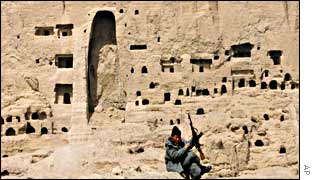 Najibullah Harar, chief of information and culture for Bamiyan, said the blast conducted by NATO-led troops near the smaller of the two statues on Thursday had caused cracks in what is left of the 114 foot-high ancient structure and its side walls.

"There are cracks in the statue and the side walls and also continuously dust comes down from the side walls or the cracks which have been created after the explosion," he told The Associated Press by telephone from Bamiyan. "This is an illegal act against the historical heritage of Afghanistan."

The two statues, chiseled about 400 yards apart into a cliff face also teeming with ancient cave shrines and paintings, were created when Bamiyan was a major center for Buddhism. The Taliban dynamited the Buddhas in March 2001, deeming them idolatrous and anti-Muslim. It was one of the regime's most widely condemned acts.

Brendan J. Cassar, chief of UNESCO's cultural program in Afghanistan, which includes conservation of the World Heritage Site at Bamiyan, said the agency had yet to establish if the blast caused damage. But he expressed concern.

"We were not informed about the explosion," he said in Kabul. "This is something we should be consulted on."

U.N. spokesman Aleem Siddique said a rocket-propelled grenade and propellant had been found near the cliff face where the smaller Buddha once stood and was moved to another spot to be blown up.

The explosion was conducted in the presence of local police who had reported the initial find to locally deployed New Zealand troops and a U.N.-government project that destroys stockpiled weapons left over from Afghanistan's decades of war, he said.

But there were widely differing accounts of how far the explosion happened from the 1,500-year old remains.

Harar said the blast happened between five and 10 yards away; the U.N. reported it went off about 100 yards away; NATO said it was over a half mile from the historic site.

"There was no damage. The provincial governor and local authorities were all informed of the incident and of the plans" for the explosion, said Maj. Martin O'Donnell, a spokesman in Kabul for NATO's International Security Assistance Force in Afghanistan.

Bamiyan is located in Afghanistan's remote Central Highlands and it was not immediately possible to reconcile the varying information.

Since the fall of the Taliban regime in November 2001, international experts have made painstaking efforts to recover and piece together fragments of the Buddhas and stabilize the niches that remain. UNESCO has placed the entire Bamiyan Valley region on its World Heritage in Danger list.

"No controlled explosions should be taking place in the area. Even planes are not allowed to fly over the area. It is a World Heritage Site," Siddique said.

Also on Saturday, Britain's Defense Ministry said in a statement that a soldier was killed on patrol in Afghanistan and three others injured when their vehicle struck a land mine.

The ministry said the incident happened Friday afternoon during a routine patrol in the Nowzad area in southern Afghanistan's Helmand province.

The soldier was pronounced dead on arrival at the British military base in Helmand known as Camp Bastion. The three others are being treated for their injuries.