BAMIYAN, Afghanistan -- "We got him!" screamed Afghan archaeologist Anwar Khan Fayez as he leapt from the pit beneath the towering sandstone cliffs, where the Bamiyan Buddhas once stood. 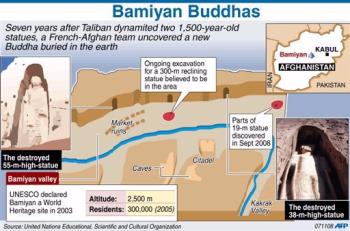 Seven years after Taliban militants blew up the two 1,500-year-old statues in a fit of Islamist zealotry, a French-Afghan team in September uncovered a new, 19-metre (62-foot) "Sleeping Buddha" buried in the earth.

The news that a third Buddha escaped the Taliban's wrath has caused excitement in this scenic valley, where the caverns that housed the ruined statues are an eerie reminder of Afghanistan's past and present woes.

"It was a happy moment for all of us when the first signs appeared. Our years-long efforts had somehow paid off," Fayez told AFP.

The team, led by France-based archaeologist Zemaryalai Tarzi, made the find while hunting for a lost 300-metre reclining Buddha mentioned in an account by seventh-century Chinese monk Xuan Zang.

The Afghan-born Tarzi began mapping the site nearly 30 years ago but decades of conflict and the rise of the 1996-2001 Taliban regime put the search on hold.

Then in March 2001 came the destruction of the Bamiyan Buddhas, until then the world's largest standing Buddha statues.

Hewn into the cliffs in the sixth century by Buddhist pilgrims on the famed Silk Route, the statues had survived attacks by several Muslim emperors down the ages, while even Mongol conqueror Genghis Khan had spared them.

But with the backing of Osama bin Laden's Al-Qaeda movement, Taliban leader Mullah Mohammad Omar declared that they were idols that were against Islamic law.

Defying international appeals, the Taliban spent a month using first anti-aircraft guns and then dynamite to obliterate them.

Saddened but with renewed determination, Tarzi and his team returned soon after US-led forces and the Northern Alliance ousted the Taliban in late 2001 to renew their search for the giant missing Buddha.

What they found instead, in September this year, were parts of a previously unknown, smaller Buddha figure, including a thumb, forefinger, palm, parts of its arm, body and the bed on which it lay.

"This is the most significant find since we started here," Abdul Hameed Jalia, the director of monuments and historical sites for Bamiyan province, told AFP at the excavation site of the new 19-metre Buddha.

"At first they found part of the leg but they weren't sure what it was," said Jalia. "But when they found more, Mr Fayez screamed out of happiness and ran to our office to find Mr Tarzi."

Fayez said the head and other parts were largely destroyed, possibly by Arab invaders in the ninth century.

"We have not found the whole statue. But we can tell from other parts that it appears to be 19-metres long," Fayez said.

The site has now been covered with earth to protect the Buddha from both the ravages of the harsh Afghan winter and from the attention of antiquities thieves.

Tarzi told AFP in an e-mail that he and a number of French colleagues aimed to return next summer to dig out the rest of the statue.

Meanwhile, there are fresh clues about the 300-metre Buddha, officials say.

What appear to be the remnants of a gate complex that may have led to the statue have been discovered under an apparently collapsed section of cliff between the two holes left by the Taliban.

"Mr Tarzi's team has found signs that indicate that the big lying Buddha is there and has 70 percent hopes that they will find it," said Najibullah Harar, head of Bamiyan's information and culture department.

Amid hopes that they could one day be rebuilt, Afghan, Japanese and German teams are also stabilising the sites of the destroyed statues -- the bigger 55-metre figure known as Salsal and the 38-metre statue known as Shahmama.

Boulder-sized chunks of the Buddhas still lie where they fell, each individually labelled. Ghostly outlines of the two figures are still etched in the rockface and twisted metal shell casings litter the ground.

Archaeologists' efforts have been helped by the fact that Bamiyan -- inhabited by Shia Muslims from the Hazara ethnic minority that was once persecuted by the Taliban -- has been a relative oasis of calm.

But ongoing debate over whether to reconstruct the Buddhas reflects the uncertainties that haunt post-Taliban Afghanistan.

"It is the desire and the wish of the Bamiyan people to see, if not both, then at least one rebuilt," Habiba Sorabi, the governor of Bamiyan province, told AFP in an interview at her office overlooking the statues.

Rebuilding the Buddhas could help foster a tourist industry in the desperately poor region, which lies 200 kilometres (124 miles) northwest of the relatively prosperous capital Kabul, she said.

UNESCO declared Bamiyan a World Heritage Site in 2003 and there have been discussions with international partners about using the process of anastylosis, by which ruined monuments are reassembled from old fragments and new materials.

"But unfortunately the central government does not want to work on it," added Sorabi, who is the only female provincial governor in Afghanistan. "It is a shame."