TAXILA, Pakistan -- Pakistan harbours rich Buddhist treasure, which, with proper projection, can help turn the country into a hub of Buddhist religious and cultural tourism. 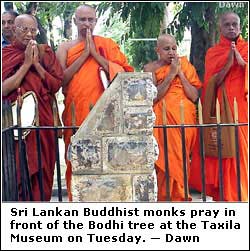 All it requires is making he Buddhist countries aware of this priceless asset through publications, and organising seminars and exhibitions to attract tourist from these countries.

This was stated by Chief Prelate of Sri Lanka Rajakiya Pandita Davuldena Gnanissara, while taking to newsmen here in Taxila Museum on Tuesday.

The chief monk along with heads of four different sects of Buddhism in Sri Lanka, namely Davuldena Gnanissana Maha Theva, Vevaldenjye Medhalankara, Niyangoda Vijitasiri and Dr Plyasna Dissanyake, is on a state visit to Pakistan. Eminent Muslim scholar of Sri Lanka and attorney at law Dr Z.Z. Akbar also accompanied the delegation. This is the first ever visit of any monk from Sri Lanka to Pakistan. The delegation is here to explore the religious and cultural potential in various parts of the country, especially Takht Bhai and Swat.

The chief monk of Sri Lanka said in his country, Buddhism was practised by nearly 70 per cent of the island’s 19 million people, but they had little information about Pakistan. He said Pakistan should project its Buddhist treasure through publications in Sri Lankan language, provide documentaries to the television channels, and organise annual exhibitions to show the world its cultural and archaeological heritage. He said Pakistan could annually attract thousands of religious tourists from Sri Lanka if Pakistani officials concerned adopted aggressive tourist policy.

Responding to a question, he appreciated the efforts of Pakistan government for preserving Buddhist worship sites. He said he was much impressed by the archaeological treasures, well- preserved sites and excellent preservation of the Buddhist artifacts.

The chief monk said their visit would add new dimensions to the relations between the two countries. He thanked the Pakistan government for giving them this rare opportunity to be in the land of Buddha and also for the hospitality.