The end of Taxila

Taxila, Pakistan -- With the defeat of the Huns in 528, Taxila attempted to make a comeback. But forsaken by its upper classes, Taxila perhaps became home to rustics from surrounding settlements and began its final journey into the long night. 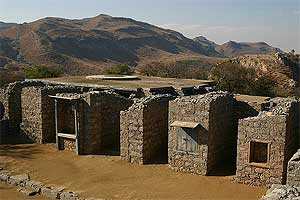 Beginning with the annexation of Taxila to the kingdom of Alexander, there began a three hundred year-long period of Taxilan Hellenisation — save of course the century-long hiatus of the Mauryan period.

The successors of Alexander’s general Seleucus Nikator annexed Afghanistan and Taxila together with most of modern Pakistan.

A hundred and fifty years later, they were overthrown by the pale-skinned Scythians (Saka to the Indians). These horse-riding warriors so overwhelmed our part of the world that Sindh became Saka Dvipa — Island of the Sakas for the people of India and Indo-Scythia for the distant Greeks.

Taxila was now ruled by the Scythian king Maues. Within a few years of his death in 53 BCE, the land was overtaken by yet another wave of equestrian warriors. The Parthians had much in common with their distant kinsmen, the Sakas; only they were a good deal culturally less refined than the people they replaced. They had, nevertheless, the desire to appear as Greek as possible and therefore emulated Greek fine arts, even if in a somewhat cruder form.

By the year 19 CE, Taxila was firmly in the able hands of the Parthian king Gondophares in whose reign the Greek philosopher Apollonious visited the city to tell us so much about it. When Gondophares died in 50 CE, so too did the great age of Hellenisation of Taxila come to an end. No long after this great king’s death, Taxila was visited by the plague which wiped out a major part of its population and left the city reeling.

In that enfeebled state about the year 65, it was run over by the Kushans — another Central Asiatic race. Unlike the nearly bloodless takeover by the Parthians only fifty years earlier, this change was bloody: as the Kushans tore across the Yusufzai plain leaving death and destruction in their wake, and even as they came over the fords of the Sindhu River, Taxila was seized by a frenzy of terror.

With only their lives and the clothes on their backs the Taxilans fled to the safety of the Margalla hills. Behind them they abandoned all that they valued in the hope of returning to recover their treasures and rebuild their lives after the trouble subsided.

Few made it back, however: ‘Many of these [Parthian] antiquities, particularly the gold jewellery and the vessels of silver and bronze, were discovered in treasure hoards which the townspeople had evidently buried in haste beneath the floors of their houses under the menace of the Kushan invasion and which they did not live to recover; others were found scattered amid the debris of the fallen buildings.’ Sir John Marshall goes on to declare the archaeological yield of Parthian Sirkap as the ‘richest and most varied collection of personal ornaments, household utensils, implements and arms that has yet been found in India.’

Thus began a new period in the long and chequered history of Taxila: the age of the Kushans. Just two kilometres to the north of the ruins of Sirkap, on the far bank of the winding Lundi Nallah, in a wide sylvan plain, the massive buttressed walls of what we today know as Sirsukh mark the site of the Kushans’ Taxila.

It is not known why the change was warranted; perhaps the new masters of Taxila thought the overlooking spur of Hathial to the south of Sirkap (where the Kunala monastery sits) disadvantageous to the defence of the city; perhaps the site was considered inauspicious for memory of the earthquake (of 25 CE) and the plague would still have persisted. Or perhaps the Kushans considered it inappropriate to inhabit a city they had wrested from a weaker foe. Whatever the case, when the transfer did take place, it was only partial as it had been from Bhir to Sirkap. This time around too, the lower strata of society continued to reside in the older city.

Kushan rule over Taxila still tantalisingly holds its secrets because Sirsukh, owing to waterlogging, has not been properly investigated. But one thing we do know without any doubt: that Kanishka, the celebrated Kushan king (ruled circa 140-165) extended his sway beyond Taxila to Kashmir, Punjab and Afghanistan. Great building activity took place with monasteries such as that of Jaulian, Mohra Moradu and Giri being raised to consecrate images of the Buddha. The fame of Taxila as a Buddhist centre spread across the northern borders to China and the city was thronged with pilgrims from distant parts.

But kingdoms decay and Kanishka’s was no exception. In 230 CE, Ardeshir Babagan, the founder of the Sassanian dynasty, took over Bactria and Gandhara before extending his influence into Punjab as far east as Sirhind. Taxila changed hands once again between Persians and Kushans before finally falling into the hands of another branch of Kushans known after their leader as the Kidara Kushans. This was the year 390 and these newcomers were flying from the more powerful and ruthless White Huns.

Having established themselves in Taxila, the Kidara Kushans saw just half a century of relative peace as the Huns engaged in their depredations in the lands beyond the Oxus River. Slowly news began to percolate across the Hindu Kush barrier of the bloody progress through the Afghan highlands of barbarians with ‘broad shoulders, flat noses, and small black eyes deeply sunk in their heads, and little or no hair on their faces.’ In 460 or shortly thereafter, the tempest that was the White Huns, having ravaged Afghanistan, burst across the Suleman Mountains to wreak havoc on the trans-Sindhu countries.

Annals of the Chinese travellers Fa Hian (400 CE) Sung Yun (520-21) and Xuanzang (630-46) contain details of bone-chilling atrocities wrought by the ruthless Toraman and his son and successor Mehr Gul also known as Attila of Indian Huns. But it is Pundit Kalhana’s epic Rajatrangini (written circa 1150) that tells us of this killer of ‘three crores’ had no pity either for women or children or the aged, and that the progress of his army across the countryside was marked by a cloud of vultures and crows that followed in their keenness to feed on the corpses they left behind.

One morning as the monks from, say, Jaulian or Bhamala were preparing to set out on their alms-seeking trip to the streets of Taxila, they would have seen the dark cloud of birds and heard the din of the advancing army. Some may have stayed to try and defend what they and so many generations before them had held dear to their souls. Others would have fled into the hills. But not one who stayed lived to tell the tale of what transpired. The town of Taxila was laid low, its monasteries given over to arson and silence descended on this once glorious city, a silence that was broken fifteen hundred years later when John Marshall’s team struck the first spade in the hills known as Dheri Shahan — Mound of the Kings.

With the defeat of the Huns in 528, Taxila attempted to make a comeback. But forsaken by its upper classes, Taxila perhaps became home to rustics from surrounding settlements and began its final journey into the long night. In the annals of northwest Punjab, its name was used for the last time by Xuanzang. Thereafter it was to be known only as the place where the great Buddha had offered his head to a starving tiger: Sirkap (Cut Head), Babarkan or Babar (Tiger) Khana. The name Taxila, Takshasila or Takhasila, completely lost, was not even part of the folklore.

It was with considerable effort, therefore, that 19th century archaeologists were able to fix its position. But when the name Taxila (now corrupted on local tongues to Tuskla) again became fashionable, the uneducated masses took it to signify ‘ruin’.

Do not then be surprised when asked which Tuskla you would like to see: the Bhir Tuskla or the Giri Tuskla or the Jaulian Tuskla?